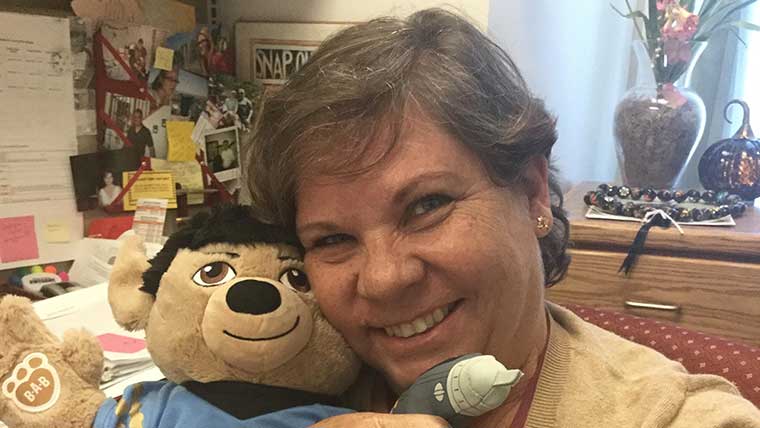 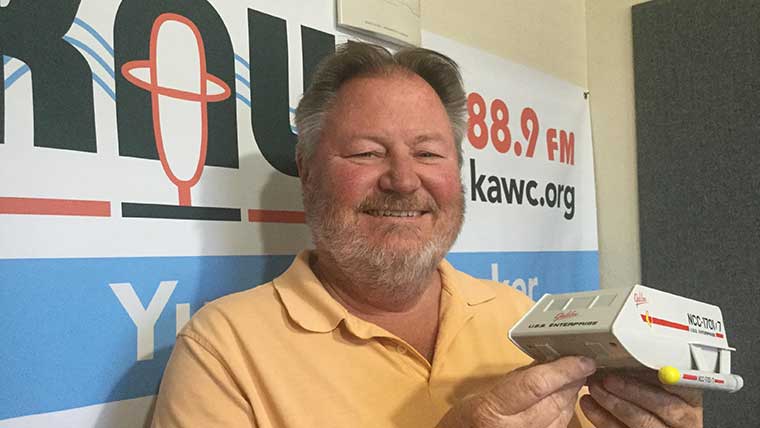 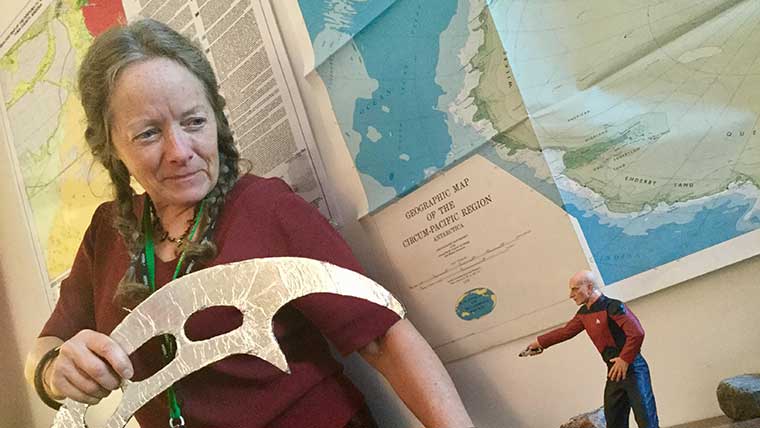 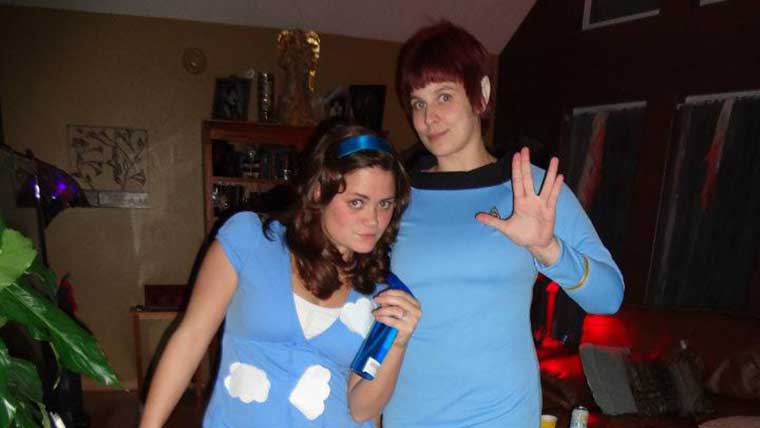 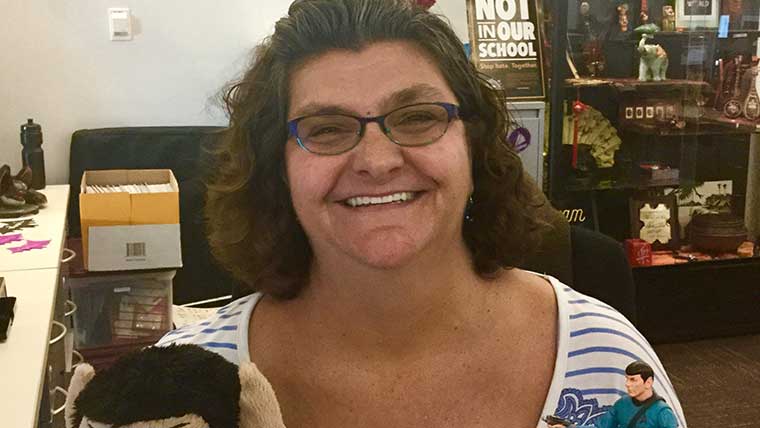 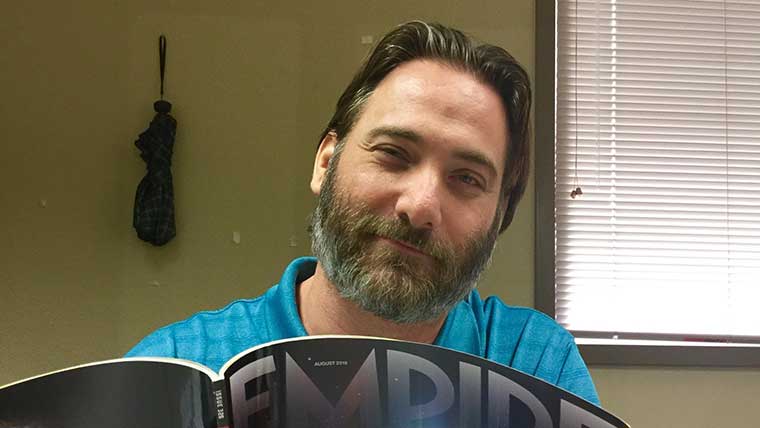 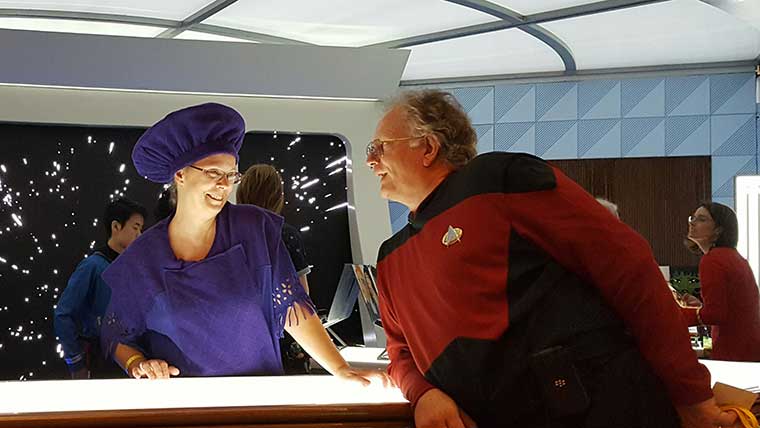 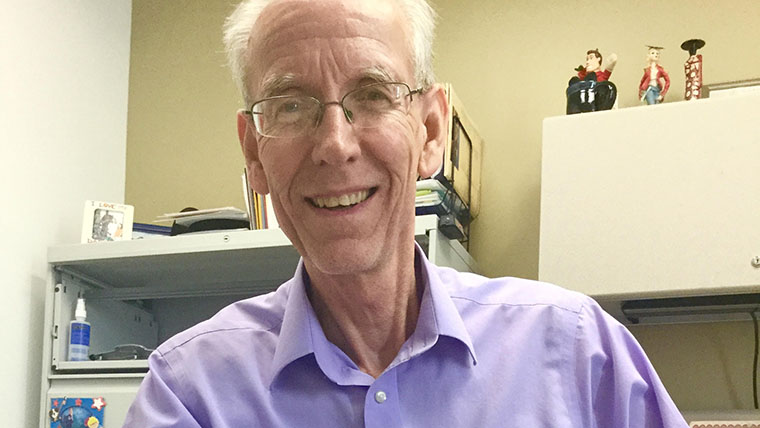 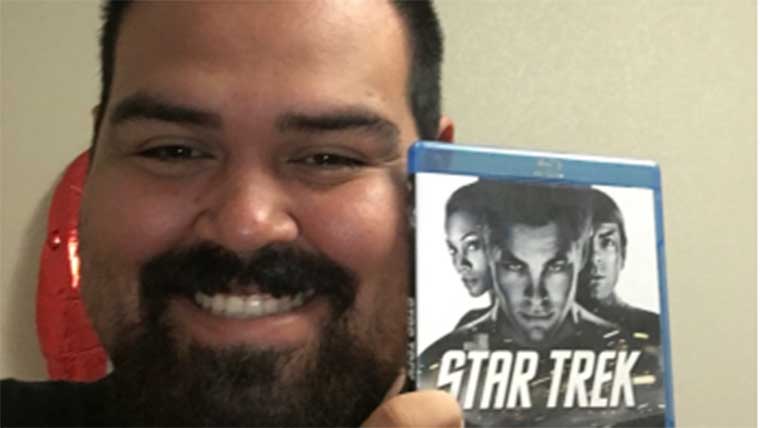 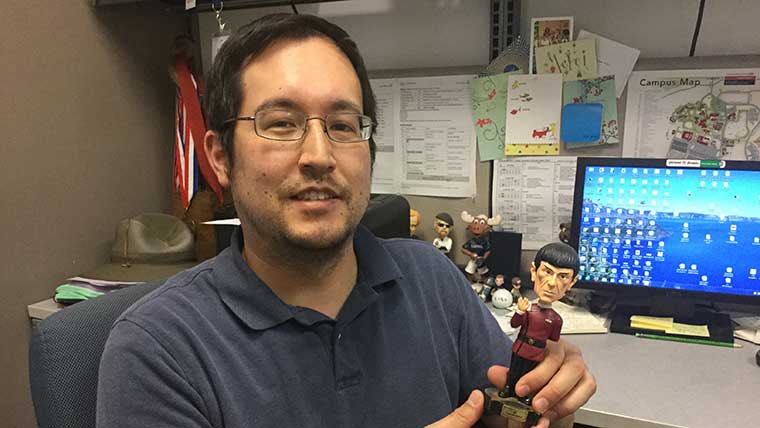 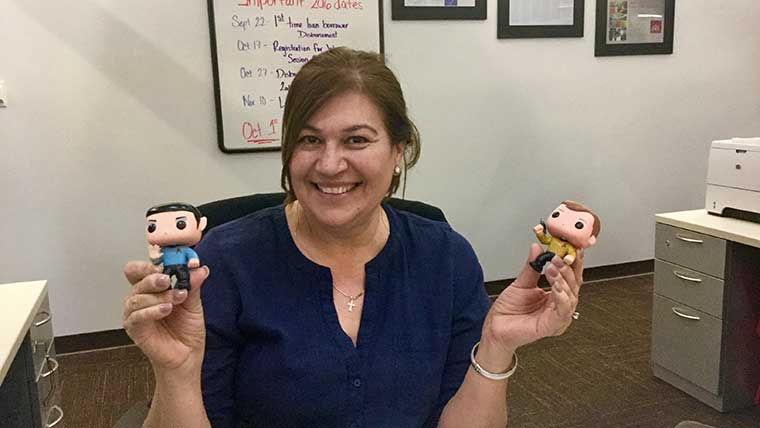 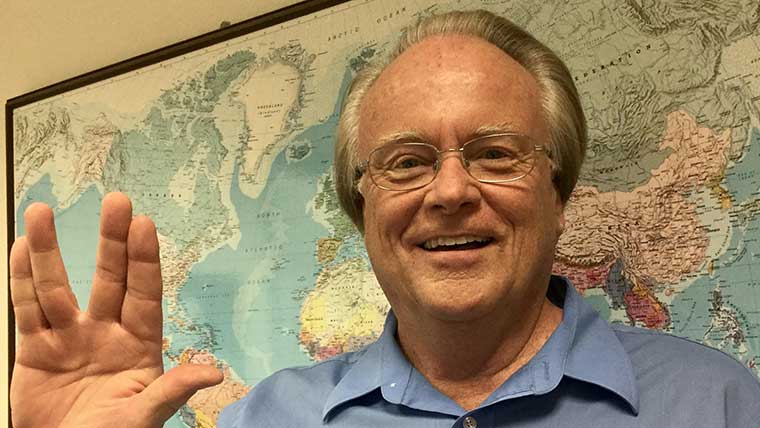 From the Stars, Inspiration

“Space: the final frontier…” These are the words that galvanized a generation.

Since its television debut on Sept. 8, 1966, Star Trek has captivated the minds of adults and children alike. Now that the franchise is celebrating its 50th anniversary, we might wonder how Star Trek has influenced our corner of the galaxy, namely the faculty and staff at Arizona Western College.

Ahead of its time

Most of the faculty and staff who were interviewed agree that the original series with Captain Kirk and Mr. Spock was the best incarnation.

“The other Star Trek shows don’t pass for the experience of the new being the new,” said Catherine Hernandez, a workforce development and vocational research analyst. “This was the first time, the first group, the first Enterprise. It was awesome!”

Star Trek truly was a novel show for its time. While there were other science-fiction programs on the air – most notably The Twilight Zone, Lost in Space and The Outer Limits – Westerns were the main moneymakers. Because of this, Gene Roddenberry, the creator of Star Trek, pitched the program as a “wagon train to the stars.”

The program was originally rejected by several networks as being too cerebral, but with the support of Lucille Ball, who owned Desilu studios, Star Trek was greenlighted. The show was produced, complete with brightly colored sets and uniforms (to appeal to color-TV owners), futuristic gadgets and dazzling aliens, with a few heady ideas slipped in when nobody was looking.

“Finally there was a science-fiction program that had some teeth in it,” said Fred Croxen III, a professor of geoscience. “Even though the science was way beyond, they really tried to infuse it into the various episodes.”

It was the scientific aspect that caused many to refer to Star Trek as the first serious form of televised science fiction. The science was way ahead of its time. Even today, there are no “transporter pads” that can beam subjects onto a planet, there are no “quantum torpedoes” to fire at enemy ships and “warp travel” is theoretically impossible.

Even so, the scientific reality suggested in Star Trek was a very reasonable extrapolation from the technology of that time. So reasonable, in fact, that a lot of the futuristic technology in the program exists today.

“As an adult now, I look back and I think it was the idea of the possibles,” said Hernandez. “A lot of the things that were way in the future are actually starting to come around and the whole idea that science fiction sometimes runs science.”

Science was especially championed by the show’s most reknowned character, the ever-logical Mr. Spock. Spock functioned as first officer and chief science officer to the U.S.S. Enterprise. He was half Vulcan, an alien species that suppressed all emotions in favor of the pursuit of logic. His human half was the source of much internal conflict, but usually Spock came across as an unemotional and devoted scientist.

Spock’s character appealed to many viewers who longed for freedom from emotional turmoil or who simply loved science.

“I can tell you I got my start as being a scientist by watching Leonard Nimoy play Spock,” said Dr. Catherine Hill, another professor of geoscience. “I just thought being a science officer was the coolest thing in the world. That’s what got me started on this.”

“Spock was kind of a hero of mine when I was a kid because he was very logical and not very emotional,” said Mel Parker, a career services consultant. “I grew up in a family where they were pretty much all that way – not a lot of hugging or kissing or that kind of stuff. It’s a wonder any kids were born.”

Spock’s character also served another function: he provided an alien presence that constantly reminded viewers that Star Trek was set in 23rd Century outer space. His character contributed to a significant aspect of Star Trek – diversity.

“If you look at the bridge of the Starship Enterprise, you have all different ethnicities,” said Wendy Hoag, an IT librarian. “I wish there would have been more women, but there were different ethnicities, which you just didn’t see on TV at that time. It was like, ‘Here’s the future. It’s not going to be just a bunch of old people; it’s going to be all kinds of people.’”

The first Star Trek featured a Scottish chief of engineering, a navigator of Japanese descent, a Russian helmsman, and most importantly, a female African-American communications officer.

The communications officer, Lt. Uhura, was revolutionary. Before Star Trek, it was unheard of for an African-American man, let alone a woman, to play a non-servile role. Uhura’s character was the ship’s fourth-highest-ranking officer, a role that Martin Luther King Jr. greatly admired.

Going even further, in 1968 Star Trek aired the first interracial kiss in television history,  between Lt. Uhura and Captain Kirk in the episode “Plato’s Stepchildren.” While there was fear from the network that the episode would enrage viewers; instead a great outpouring of positive fan mail ensued.

“Although it was a science fiction series set in the future, it dealt with contemporary issues – racial issues, societal issues and so forth,” said Parker. “They were commented upon very creatively in the series. When I was ten years old, did I know that kind of stuff? No, but now looking back on it – yeah, they kind of broke ground on a lot of things.”

The original Star Trek was progressive, and the series that followed it upheld that tradition.

The Next Generation introduced many new alien species such as the Betazoids, Ferengi, Cardassians, Bajorans, Q and, most notably, the Borg, which were an interesting portrayal of the concept of a hive mind. This series also introduced a new form of life through the character of Data, a sentient android, and it provided Klingon culture with more depth.

Deep Space Nine, the most critically acclaimed Star Trek series, was notable for its character, Benjamin Sisko – the first African-American captain portrayed in the series. The program was also memorable for taking place in a space station, for closely portraying the political tensions between Cardassia Prime, Bajor and the Federation, and for depicting a serious war from beginning to end. The program also added depth to Bajoran, Ferengi, Cardassian and Trill cultures.

Voyager is best known as the first Star Trek series to feature a woman, Kathryn Janeway, as captain. The series took place in a new, unexplored region of space and introduced more alien species such as the Talaxians, the Ocampans and the Kazons, and explored the Borg in greater detail.

Enterprise is known for being set before all of the other Star Trek series. It explored the history of the Federation before its forming, explored relations between humans, Vulcans and Andorians, and introduced Denobulans.

Star Trek is widely beloved for many reasons. Most of the faculty and staff who were spoken with strongly agreed that what made the show so great was its vision of the future.

“Some of the things that you see around today, they don’t have issues with, like poverty and interspecies relations,” said Robert Killin, a professor of chemistry. “That was interesting to me.”

According to creator Roddenberry, the message of Star Trek was that humanity would reach maturity when it learned to celebrate its differences.

“Whether you had pointy ears or green skin, there’s still that humanity that ties us all together,” said Ann Wilkinson, professor of theatre.

Star Trek painted a bright future, one in which humanity found peace and looked to better itself through the pursuit of knowledge and exploration.

“Star Trek fans have to be the kind of people who want a better world,” Fenske said. “They’re always trying to help each other out.”

For 50 years, Star Trek has appealed to the explorers, the scientists and the dreamers in all of us, but the human adventure is just beginning. With a new program and more films on the horizon, it’s clear that this unique concept in entertainment programming will live long and prosper.