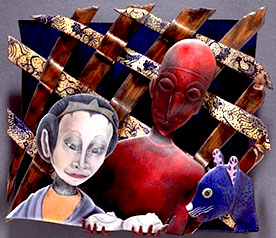 The art of the personal narrative

The Yuma Symposium is comfort food for hungry artists.

Arizona Western College, in conjunction with the Yuma Symposium, hosted Pre-Symposium Day at AWC on February 27 in the painting and ceramics rooms in the Art Building. Four symposium presenters gave previews of their presentations free to the public.

The Yuma Symposium is a public series of demonstrations, lectures and slide presentations given by both internationally recognized and emerging artists who have demonstrated unusual talent. The annual event has been hosted continuously by the artistic community in Yuma for more than 40 years.

On that Thursday, Martha Banayas gave a moving presentation on her art. She has been making beautiful art that displays glimpses of her life experiences, like her travels through Southeast Asia and Mexico. One of her masterpieces, titled "Guardian," is a collection of figurines native to certain areas of where she has traveled, all put together as a representation of "angels" or special people in her life who made her feel at home while she was expanding her knowledge in foreign lands.

Most of Banayas' art displays a personal story, or "personal narrative" as she calls it. Banayas fought a brutal battle with cancer and she came out victorious. While she was going through therapy she never once stopped working on her art. As a result, she was able to tap into another side of herself that was unexplored, a much darker side.

One of the masterpieces she created during that time, "Demon of Dread," compels the viewer to stare straight into a demon's red eyes.

"This is what cancer feels like," she said of the piece. "It's as if you had this guy constantly reminding you that you might not make it through another day."

Banayas' audience walked away with an altered perspective on art and on life in general. They could truly feel her emotions through her art, but they also gained a greater appreciation of what it means to be human by her uplifting words.