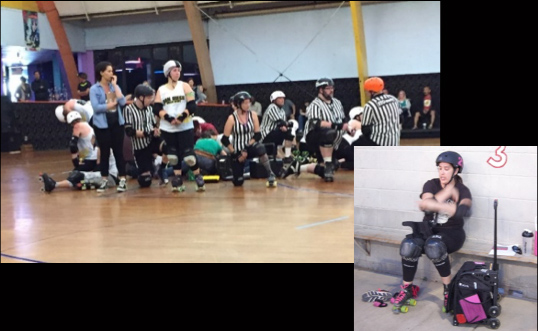 During one period of my life, it was nearly impossible to strip my roller skates from my feet. I skated to the park, the store, around the block multiple times, only taking them off to go inside the house. Eventually, I moved on to one obsession then another. For some girls, however, roller skating seems to be in their blood to stay. What does a little girl do when she grows up, but not out of her skates one might ask? Why, become a derby girl, of course.

I recently found myself wondering what the draw to roller derby was and what types of ladies joined. All I ever really knew about it was that it was big in the 1970s, but seemed to have made a comeback over the last decade or so.

My only real memory of roller derby is that it was played on a sloped track and often had a bit of a scripted feel to it with a showy player rivalry much like wrestling. However, upon doing a bit of Internet research on the Roller Derby Resource site, I discovered that roller derby was created back in the 1930s, by a man named Leo Seltzer from Chicago. Apparently Seltzer was trying to capitalize on the popularity of speed skating by creating a team and point system to go along with it. It later gained popularity in the ‘70s as part of the sports entertainment world.

According to the website, “Modern-day roller derby has moved away from scripted bouts of the 70’s and is a true full contact sport that focuses on athleticism and agility.” Nowadays, roller derby is played on a flat track and is far less theatrical than derby of yesteryear.

My curiosity then led me to contact our local roller derby team here in Yuma, Arizona – the Border City Rollergirls, who were more than happy to let me come out and watch them practice.

When I arrived, Jessica, the team’s current manager, filled me in some of the nuances of the game before the other ladies arrived. The “bout” or game consists of two 32-minute periods in which multiple 2-minute “jams” or attempts to score points occur. Players generally rotate every two minutes from the bench to the track.

Jessica explained that during the bout, there are 5 players on the track – 3 blockers, 1 jammer and 1 pivot. The jammer tries to break through the opposing blockers to then circle the track to score points, while the blockers try to keep the opposing jammer from passing. The pivot primarily acts as another blocker, but can switch to the jammer position if the jammer hands the position over to them – handing over what is called the star “pantie,” which the pivot then puts on.

This pantie is a helmet cover worn by both the jammer and the pivot so that they are identifiable, stars on the jammer and a stripe on the pivot. A jammer may choose to pass the pantie if they are tired or injured. When the jammer finally does break free and is able to make a lap around the track, the lead jammer from either team is the one who is able to score points.

In order to gain the lead, the jammer must first make one complete pass through the pack before the scoring can begin. Players can occasionally get a bit overzealous and physical while trying to block, which can result in a 30-seconds trip to the penalty box.

After explaining the game, Jessica filled me in on the inner workings of the team. The Border City Rollergirls were founded in 2012, by a woman who had been involved in roller derby in Washington, before she relocated here to Yuma. The team currently has 12 members who are able to play, as well as 5 or 6 who are still working on passing their skills tests.

Some of the required skills, determined by the Women's Flat Track Derby Association, are jumping to the side on skates, fluidity in skating, skating backward and being able to circle the track 27 times in five minutes.

The team meets twice a week to practice for around two hours. They usually practice at the Fairgrounds but were currently at the Kennedy rink recently due to the fair being in town. Jessica tells me that it can be difficult to find practice spaces because people are convinced they are somehow going to damage the space.

“I don’t know what they think we do,” she said. “We’re only using roller skates.”

Each member pays dues of $25 a month to cover practice-space fees and travel expenses. The team includes a training committee that generally conducts a quick pre-practice meeting to determine training tactics for the day.

Before the practice began, I chatted with a few of the ladies about what drew them to getting involved in derby:

The ladies had been gearing up for practice while telling me a bit about themselves. As far as clothing, they were dressed in comfortable gym attire that was easy to move in. Some of the gals haul their gear in a specialized roller derby gear bag, and a few just use a small rolling suitcase.

I watch as they laced their quad skates checking the toe stops in the process. Next came knee pads, elbow pads, wrist guards and helmets. Ginny later told me that the helmets are only good for one or two impacts before they need to be replaced. I was told that a skater startup kit runs anywhere from $150 to $300 for decent gear. Jessica informed me that her husband purchased her a $500 pair of skates after her first year. They then popped in their mouth guards and hit the track.

Before the team started drills, Jocelyn made an attempt to pass her last skills test so that she would be able to play in an upcoming bout. If she is able to skate 27 laps in five minutes, she is eligible to play. Jack followed her around the track to help her keep pace while Ida kept time. The other girls looked on and began shouting words of encouragement. She kept pace nicely in the beginning, but started to tire. About 22 laps in, she fell. Loud shouts telling her she’s almost there coaxed her back to her feet. She was able to finish, but missed the five-minute mark by seconds. She won’t be eligible for the next bout.

The rest of the team then took to the track to begin drills. They began warming up by skating laps while doing leg lifts and stretching. Music played loudly in the background to get them motivated. Ginny led the training drills for the day. First she had the ladies practice stopping in pairs, which is used as a blocking tactic. After a quick water break, she had them practice stopping in threes. They finished the evening’s practice with a small scrimmage.

During the scrimmage, Ginny cut herself and had to sit on the side until the bleeding stopped, giving us a chance to talk.

“It’s fairly common to have girls try out for the team that are in a crossroads in their lives and looking for a way to find themselves or fill a void,” she said. “Many join roller derby as an outlet for whatever stressful issues they may be having in their lives, such as divorce or a bad relationship.”

She also told me that the derby camaraderie runs worldwide and acts as a surrogate family for some.

Although I now felt I had a much better insight into the world of roller derby, I knew I wouldn’t possibly feel the full affect until I witnessed a bout for myself. I had learned that the team was traveling to San Diego the following Sunday for a bout against the San Diego Roller Derby team, so I started planning my road trip.

Sunday morning, the doors of the San Diego Skateworld roller rink opened at 9:30 a.m. The bout was scheduled to start at 10:00. I grabbed a program and found a seat so I could watch the teams take turns warming up.

It was a mixed crowd of spectators ranging from young to old. Jess had mentioned to me that the older crowd liked to come watch, but were sometimes disappointed that current roller derby focuses more on player skill and less on theatrics. She had also mentioned that the younger crowd assumes all derby girls are lesbians and, while some in fact are, many are married with children, herself included.

The bout got underway while music played loudly in the background. The two teams put their blockers in position and began trying to keep the opposing jammer from breaking through the pack. The jammers skillfully managed to hop around the pack to start lapping the track. The way they were able to jump around the other girls as if on tip toes instead of skates was most impressive.

The bout was fairly fast paced and what I had learned about the game and what I was seeing began to fuse together. The jams went by quickly with the players rotating in and out every two minutes for a quick water break and rest. Ladies from both teams made trips to the penalty box for various reasons. The occasional fall was followed up by players leaping back to their feet and re-entering the track if pushed out of bounds.

I found myself feeling exhilarated and started to consider trying out for the team. That feeling, however, was fairly short lived after I watched a gal from the opposing team go down on her ankle wrong and break it. I was feeling a little less daring after that.

Luckily, the league regulations require that EMT’s be present during bouts. They quickly responded and stabilized her while waiting for the paramedics to arrive. The San Diego team along with the referees surrounded the injured player by sitting around her on the floor to create a bit of a privacy screen from the on lookers.

The bout was only a few minutes away from being over at that point, so the Border City Rollergirls conceded defeat. Final score – San Diego 257, Border City 95.

I now realize that roller derby isn’t just a passing fancy, but a sport that has gained popularity all over the world. I found it fascinating to scroll through the team locations and logos on the Women’s Flat Track Derby Association website, and discover just how far the sport reaches.

I now know that team members aren’t just your stereotypical tough chicks, but women of all shapes and sizes who are moms, wives, marines, real estate agents, medical students and even guidance counselors at local community colleges.

Of course there is still a bit of toughness mixed in there as well.