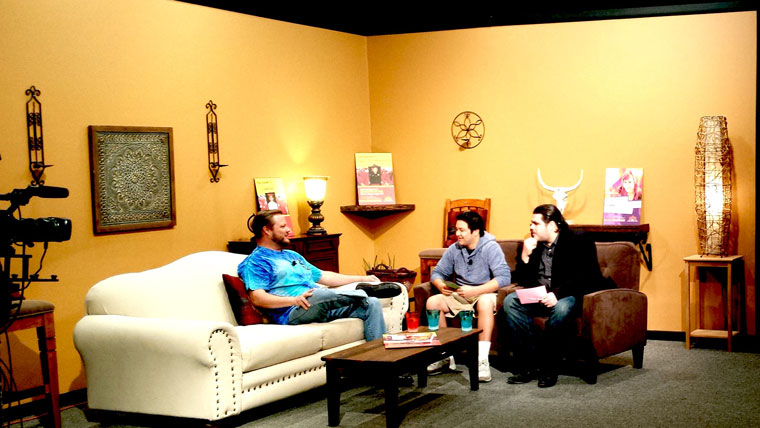 Lights, camera, wait…What was my line?

Have you ever done so bad on your first day at work that you thought to yourself, why didn’t they fire me? That was my first day in Spotlight, a student run show. I remember waking up at 6 am, picturing how I would look on the studio monitors. Walking towards the studio I couldn’t predict the situation that was about to unfolded.

On Monday, two days before my first show, I was instructed to wear jeans or pants that are formal, a dress shirt preferably black, no chains or necklaces, no hat, and no whites. Me being the slow-witted person that I am, it didn’t occur to me that the rundown was what happened on my first day in class and the actual show was on Wednesday.

In my defense the teachers and students of Spotlight didn’t make it clear that it was a run-down or maybe I was just too idiotic to realize what a run-down looked like.

Wednesday came around and I decided to not go in a formal getup. I texted my friend Emmanuel to get a second opinion.

My exceptionally, non-formal outfit consisted of casual shoes, white socks yanked high, khaki shorts, and my faded, baby blue jacket. I walked out of my house at 7:32 a.m. Emmanuel and I were under the impression that we were making great time since the class started at 8 a.m. We joked as we left for class. The facade of excitement was deteriorating the closer we drew to Arizona Western College. Agonizing, thinking of seeing my face on the big screen, I contemplated being a host. Mentally going over everything that could go wrong. I had mind tricked myself into believing that only 30 people would be watching.

“Whatever happens, happens,” I told myself.

We strolled towards the studio. We opened the door to the studio at 7:55 a.m. We could hear the chaos oozing out of the building. I instantly turned to Emmanuel,

He nodded his head. Alexis my co-host dragged me into the main set. I could hear everyone's microphones going off.

“Can you hear me” I heard being yelled.

Alexis glance at me and asked,

“What happened to the dress code we talked about.”

His outfit was aimed for professionalism with his slick back hair, grey dress shirt, black overcoat, dark blue jeans, and dress shoes. Mine was aimed more for a hipster Halloween costume.

To try to make the situation better, I asked,

I was handed an audio pack,

“Here put this on” Kamau said.

I asked Alexis for help. I had both pockets stuffed with these 1-foot audio packets. A crackling sound erupted in my left earpiece and then Emmanuel's voice;

“Alright can you hear me, do I sound good?”

I gave him a thumbs up,

Irritated by the ear piece I didn’t hear her and asked if I could have another quick demonstration. She obliged.

I couldn't believe that we were going on air with the way I was dressed and what little knowledge I had of who we were going to interview. I was pacing back and forth taking deep breaths and watching the clock.

I noticed these note cards on the host chairs with questions to ask the quests written on them.

Unknowingly, I grabbed Alexis’s note cards. When I realized they were not mine, I asked if they had more.

“Just grabs those, yea those are yours. You write questions on them or do whatever, I taped some questions that I printed out on mine.” Alexis told me.

I raced against the clock.

I scrambled looking for anything useful to give me ideas. The first thing I found was a time sheet. Blowing by the topics, reading them as fast as I could. What emerged from that were the guest’s names and the subjects they were going to talk about.

Our first guest, Bianca Rollins, appeared at the door. I hardly realized she was there until she was sitting on the couch on set.

Scott Gambles earpiece unexpectedly stopped working leaving Troy D. Baughtman, our technician, to go through wires looking for the problem. By the time the situation has been sorted out we were at the 15-minute mark.

I Sat next to Bianca writing questions I could ask her.

“How long have you been doing this” Bianca asked.

“It’s my first time,” I said as I looked down on my note card with only two questions written down.

“Easy for you to say when you're a theater major and you rehearse for months while I had come up with questions on the spot.” I thought to myself

“Well it's sink or swim,” I said trying to stay positive.

I hadn’t bothered to say anything until 5 minutes before the show. I had been tasked to do the Hard Open, a 10-second intro, that in my eyes felt like an eternity. In my head, I endlessly kept thinking of how and what I was going to say.

I questioned my co-host Alexis;

“Alexis; so, I just say ‘Hi my name is Alex Macias’, then you introduce yourself and say ‘Welcome to Spotlight’ right?” I asked.

We took our positions on the set. The lights blinded me so much I couldn't look up. In my head, I continued to distress over the idea of screwing everything up or saying something stupid on camera. I prayed that everything would go fine. The only thing I could do was try to relax and drink the water that Kimberly brought for us.

I watched as the clock raced by.  The noise had quickly disappeared and the chaos went away but internally my heart was jacked. Kimberly doing her C-shaped 15-second signal to be ready. I looked at her hand 5, 4, 3, 2, then she pointed at me.

“Hello, today welcome to Spotlight, uh, today we’re gonna be interviewing Bianca, and Leah and later were gonna have Scott do a quick review.”

That was all I said in a 10-second spot and I didn’t talk for another 2:35 minutes. I had become a statue blending into the background.

I sat there waiting for my chance to say something, anything. But I was timid' fearing I would interrupt Alexis or Bianca. I would have been silent if it weren’t for my experienced co-host giving me a shove to let me know it was my turn to say something.

“How long are the run-times for each play?” I asked.

I read off my note card trying to keep eye contact but after a while, it felt awkward. Staring at Bianca, every now and then I would scan around the room or stare at her forehead.

I started to notice I would was tapping my left foot. I was also moving my notecards in my hands which only made me more confused.

Another embarrassing thing I did was that I kept leaning forward, getting the top half of my hair in the camera shot of a guest.

I managed to come up with another question on the spot at 5:12 minutes into the show.

“So what do you guys do for Phi Theta Kappa? Is it like a club, do you guys joke around?”

It wasn’t the best question at the time but it led me to being less of a zombie. Bianca was talking about food waste in the community and how Phi Theta Kappa is trying to bring it to light. I immediately started thinking of the cafeteria and when you go to put your plate up to get it clean I always noticed all of the half-eaten food. So, I asked at 5:45;

“Are you guys also working with the cafeteria here at school?”

I was feeling good at this point. Back to back questions! “I think I might be going somewhere with this.” I thought to myself.

“We haven’t thought about that but that's a really good idea,” she answered.

“Thank you, you can steal that one from me. I need to join Kappa” I said.

The atmosphere felt like Alexis was the matador doing all the real fighting and I was the clown running around distracting the bull every now and then. But that changed after Bianca’s interview was over and Alexis turned to me

“You’ll be doing most of Scott’s interview”.

I was feeling a little anxious but ready to take on the challenge to show that I too could ask questions and act like I know what I was doing. I could see Troy on the side of the camera signaling for me to talk more with his hands. I gave him a thumbs up.

During the break I asked Scott what he was going talk about.

“Today, we welcome Scott; we’re here to talk about our local theater program; so, how's that going? I asked Scott”.

To my surprise, I had to think more on my feet than usual because Scott's planned 4-minute video suddenly stopped working putting the whole crew in a bit of a craze. but like they say, the show never stops.

We realized that the video had been cut short so I asked at 12:53,

“So, did it feel like a one-man show with other people doing the special effects?”

Having someone who does improvise like Scott was a big help because he expanded on the simple questions that I asked and the show didn’t suffer.

Both of Scott’s videos had difficulty playing so Alexis, being the veteran, would always shoot a question first and I would be still being loading my question, pun intended.

If I had to criticize myself during the last interview I would say that I dropped the ball. Not in the sense of messing up but by not being able to add anything to the conversation. I had turned into a zombie again. I had such little information on our guest that I had to borrow some of Alexis’s questions to be part of the interview.

The show was over and I felt that I had made it through the gates of hell. Okay, maybe it wasn’t that bad but to be on live television with no prior knowledge of who you're interviewing is a rush that I never want to experience again. Time had disappeared. The next thing I knew we were hanging out after the show talking about all the things that went wrong.

After assessing the faults such as my clothes, me leaning too far forward, needing to talk more, and the videos not playing, I realized my hand was shaking lightly.

To be thrown in the lion's den, never having been a host in my life, and my Spotlight crew not knowing how I would do, I think they took a huge risk in putting me in front of the cameras. I believe the show was acceptable under the circumstances. If you want to see this video, that I really hope never sees the light of day, go to AWC Spotlight: 10/5/16 Ep. 2.