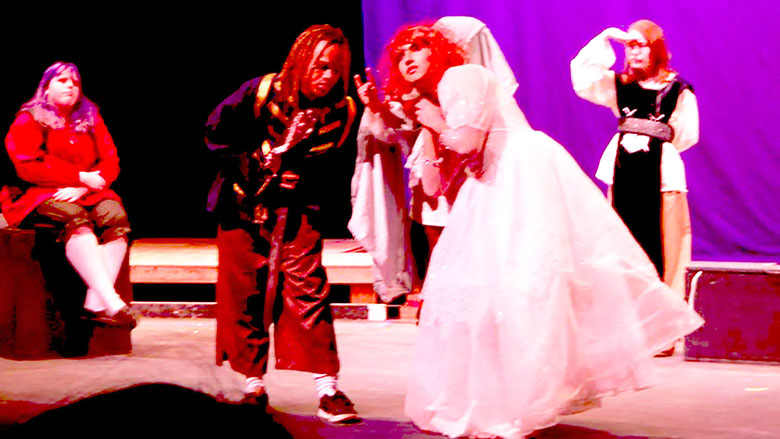 Let’s do the Bard Warp again!

Twisted Shakespeare at the AWC Theater

Imagine seeing William Shakespeare’s tragedy Romeo and Juliet as a feud between two gangs in New York City. What about Hamlet, but instead of people, the characters are lions? Retelling of Shakespearean plays is not a new idea, but for AWCTheatre, Twisted Shakespeare exposes students and community members to the Bard’s work in a way that is both educational and enjoyable.

The most recent production of Twisted Shakespeare took place in February in the AWC Theater. Produced by Ann Wilkinson, AWC’s professor of theatre, the production featured students from the Theatre program, the local Gateway Players group and Kofa High School’s drama department.

The production opened with two AWCTheatre students, Alfredo Figueroa and Salome Siruno, who created several improvised “twists” on a scene from Shakespeare’s Richard III. The scene depicts two men about to murder the Duke of Clarence by order of King Richard.

Both players demonstrated an excellent understanding of Shakespeare’s text, both with vocal interpretation and physicality in the roles. Once the players had performed the scene in its traditional language, Wilkinson came out and asked them to perform the scene again…as a Western drama.

Immediately, both actors adopted wider stances, emulating traits one might see in films such as The Good, the Bad and the Ugly. Southern drawls colored their words, giving such life to the scene that the audience howled with laughter.

Wilkinson continued to ask Siruno and Figueroa to reinvent the scene using a variety of twists, including musical and geriatric theatre. The latter received many laughs, as many of those in attendance found the topic relatable.

“We’re watching,” an elderly man in the front row warned with a laugh.

Wilkinson asked the audience if they had any suggestions for a twist on the scene. One attendee suggested a sci-fi retelling. The players then recreated the scene with many references to E.T. the Extra-Terrestrial and Star Trek, including the classic Vulcan salute.

The next scene in the production featured a soliloquy from Hamlet, performed by Jonathan Close of the Gateway Players. In the monologue, Hamlet offers direction and advice to a group of actors whom he has chosen to play for the Court of Denmark.

The stage was set to give Close an audience, with all performers scattered around the stage – seated on blocks, on the floor and standing – listening to his speech with rapt attention.

“Go, make you ready,” he said in conclusion, allowing the actors to head to their places for the next scene as the curtain closed.

The Gateway Players – Jonathan Close, Deb Winters and Alison DeDecker – performed in a variety of scenes and monologues. Close and Winters created another scene from Hamlet, and all three players performed individual monologues, including Close from The Tempest and DeDecker from Romeo and Juliet. The one that stood out, though, was Winters’ portrayal of one of the Weird Sisters from Macbeth.

“Double, double toil and trouble; Fire burn and cauldron bubble,” Winters intoned with an enchanting huskiness, drawing the audience in with her charisma and air of both mystery and insanity. The audience hardly seemed to breathe during the entire monologue.

Kofa High School’s students also stood out in the production, performing an excerpt from A Midsummer Night’s Dream. In the scene, Oberon, the King of the Faeries, and his servant Puck cast a spell on the sleeping Tatiana, the Queen of the Faeries, to make her fall in love with the first thing she sees when she wakes up. After they leave, a troupe of poor actors decide to rehearse near where Tatiana sleeps.

The twist on this particular scene involved a hallucinogen-induced dream sequence. The troupe of actors, now figments of Tatiana’s imagination, feverishly began to dance the Time Warp. They introduced themselves as the Hallucinations, which led Tatiana to ask if they were a band.

One of the highlights in the original scene was student Bukhari King as Bottom, whose head was transformed into that of a donkey by Puck. King wore a plastic donkey mask that covered his entire face, and yet he was able to clearly enunciate words and speak with enough volume to be understood. His performance had the audience nearly crying with laughter.

Twisted Shakespeare is an event Wilkinson hopes to put on every semester, and any interested students should contact her at ann.wilkinson@azwestern.edu