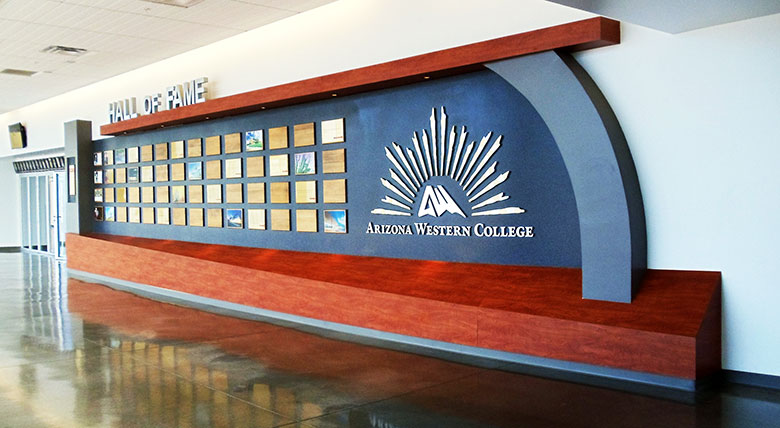 Have you noticed the wall in the walkway on the south side of the 3C building?  Have you been meaning to stop and determine exactly what the Hall of Fame represents?

In 2011, a ten-member committee was formed with leaders from Arizona Western College. They determined that the space on the wall in the new 3C building was the perfect venue to honor those who had made outstanding contributions to the college and community.

Once a year, nominations are accepted for admittance to the Hall of Fame. To qualify, a candidate must be a former student, faculty or staff member, or team or community leader. Within each category, there are specific requirements to qualify an individual for nomination.

Hall of Fame nominations are sought for individuals who have made a wide range of contributions to the mission of the college, or who have distinguished themselves in service to the larger world.

The Hall of Fame not only honors those whose work is commendable but is a source of inspiration for future generations.

Currently the Hall of Fame committee is spearheaded by Renee Smith, director of Institutional Advancement. Nominations are accepted in February. The committee subsequently reviews them and selects the top ten nominees. These are submitted to the President of the College. During the summer the President selects from one to three nominees to be inducted into the Hall of Fame. The recipients are honored at the AWC Alumni Breakfast and Hall of Fame Celebration, which is generally held in October. Once nominated, a person remains on the list for three years. Thus, three of the following nominees might be selected as this year’s inductees:

When you pass the Hall of Fame perhaps you will reflect on your own contributions to Arizona Western College and the community and on your aspirations to making the world around you a better place for all.