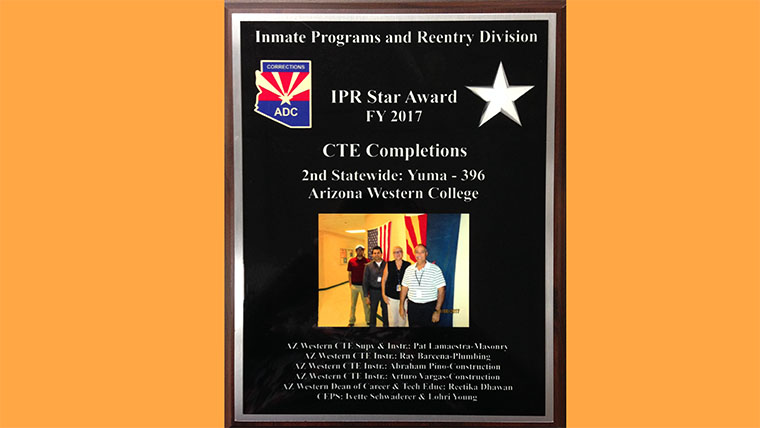 Revolving door, no way out

How do you fix a flawed prison system?

About three-quarters of released prisoners are rearrested. Of those, more than half are arrested by the end of the first year. This according to the National Institute of Justice.

One of the main contributors to the overloaded prison systems in America is the recidivism rate.

But Arizona Western College is working with the Arizona Department of Corrections (ADOC) to change that.

ADOC has decided to give out awards recognizing the efforts of everyone who is helping to educate inmates to reduce recidivism. AWC was awarded for graduating 392 inmates through Career and Technical Education programs (CTE). Although this is not the first time AWC has achieved such high numbers of graduates, this is the college’s first award of this kind.

Under the direction of Pat Lamaestra, professor of Foundations of Construction and coordinator of Prison Programs at AWC, the program has achieved this recognition. Only the top performers in the State are awarded. AWC achieved the second highest number of graduates.

“We give the inmates a real opportunity to get a job when they get out of prison,” Lamaestra said. “Our goal is to get the recidivist rate down.”

The mission of the program is to help inmates when leaving prison find a better job/career and to obtain education, life skills and confidence so they can go on to succeed despite past obstacles. Inmates receive nationally recognized certificates for successful completion of a program in Plumbing, Masonry or Foundations of Construction, ranging from 10 to 16 credits. Four AWC instructors, Pat Lamaestra (Masonry), Ray Barcena (Plumbing), Abraham Pino and Arturo Vargas (both Foundations of Construction) cover three of the five yards on the Yuma Prison Complex located just east of San Luis, Ariz.

Although the CTE  division’s new Dean, Reetika Dhawan, has little over a month at the helm, the program continues to soar to new heights.

“We as a community college are here to serve our community,” said Dhawan. “It is good for communities in a multitude of ways, including a significant reduction in crime. We are working closely as a local community college to work with our Local Prison facilities to prepare inmate for successful return to our communities and increases coordination of services to support the best use of taxpayer resources.”

As the inmates prepare to exit the prison system, there is little to nothing in place to keep them moving forward, although the prison has accomplished its job of carrying out a sentence imposed by the courts. The system has placed the inmates in a position of disadvantage, coupled with little to no support system. The lack of hope of success can be overwhelming.

When Jonathan Kruse enrolled into the CTE program, he thought this would be a waste of his time. He had been in construction for the majority of this life and knew most of the material. After graduating from the program, he was offered a position as a teachers aid/clerk, a position he kept for nearly four years. It was in this position that he witnessed first hand the profound impact of the CTE program.

“For many of the men enrolled in these courses, this is their first experience with college,” Kruse said. “There is a pride in their eyes when they see their name in the news. Their faces light up when they get their embossed certificates of completion. My decision to pursue a degree in Social Work is a direct result of my experiences with the CTE program.”

While the debate on how to fix the flawed prison system will rage on, there are countless beneficiaries of the CTE program, thanks to the institutions and people working tirelessly in the background to make a difference, giving inmates a way out of the revolving door.