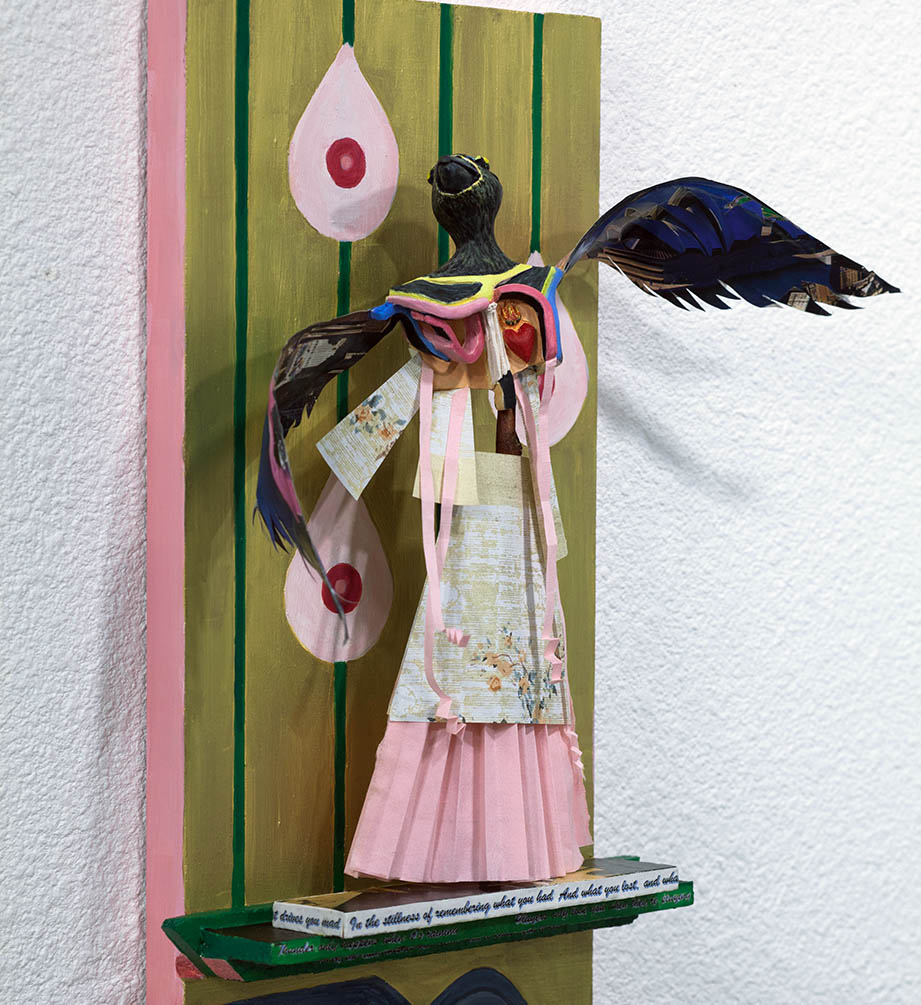 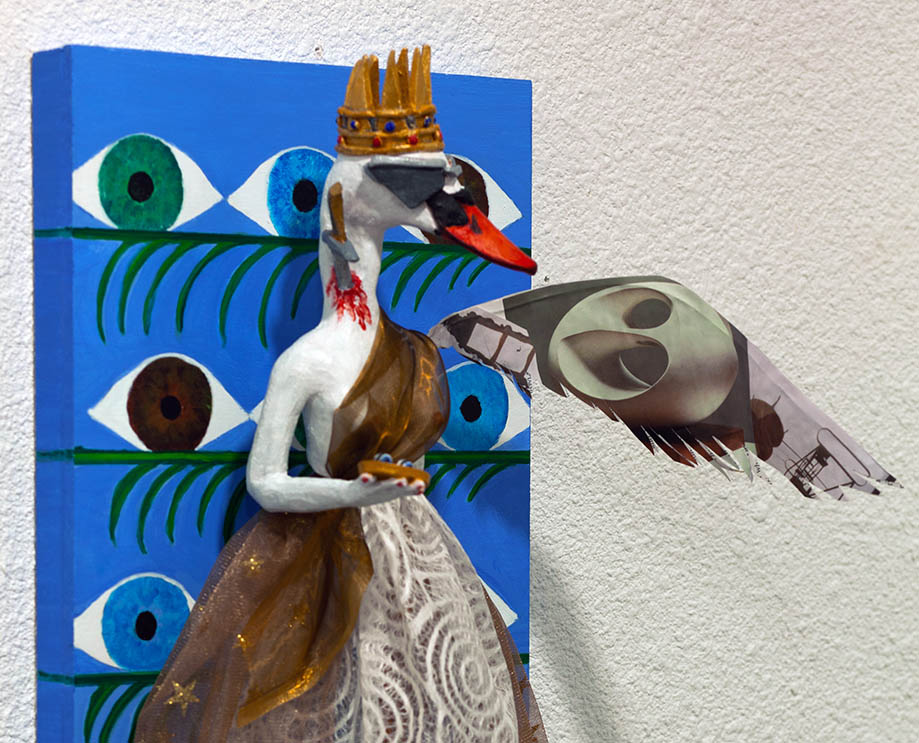 Art with a mind of its own

. A human-like bird with blood on an open wound on its leg stood boldly on the canvas, with its wings spread despite its visible injury.  This piece, titled Saint Rocco, was just one of the many unique artworks by Stacy Blackmer-Blomquist, showcased in the Art Gallery on the Arizona Western College Yuma campus, Feb. 15 through March 15.

The exhibition, Saints & Other Stories, featured a collection of pieces from the artist’s series titled Exile and Saints series, which together explore a wide range of personal topics such as “love, isolation, freedom, and limitation,” according to Blackmer-Blomquist.

Among the most fascinating pieces in the Gallery exhibition, titled Creativity, depicts a large three-dimensional ribcage torn open and lying on its side.  A life-like sculpture of a heart sits in the gaping hole with a fragile, featherless hatchling attached to an egg yolk, which was nestled in the heart’s center.

Although a bit disturbing, the raw, realistic imagery shown through the tattered cloth wrapped around the torn rib cage’s physical model highlights the hatchling’s vulnerability.  The bird’s possible exposure to the world’s dangers through the large opening is conveyed effectively through this unique use of a three-dimensional medium.

Blackmer-Blomquist started working on Creativity around 2014 and finished the piece a few years later.

“A lot of layers go into anything that I make – a lot of thoughts from different angles,” said Stacy Blomquist.

Her piece titled Heart with a Mind of Its Own, containing a large sculpture of a heart inset with a medium-sized brain, beautifully demonstrates the complexity of her work and reinforces the idea of the beauty of imperfection.  The heart’s rugged layers in the center are complemented perfectly by the abstract colors and lines around the edges of the canvas.

“I like interacting with the surface on the wall,” said Blackmer-Blomquist.  “The art hangs up, but it does more than that.”

Each of her artworks were neatly aligned within the Gallery’s four walls.  The space between each piece was designed to be consistent as the viewer moved around the room.  Although the center of the room was empty, the artwork filled that emptiness with captivating visual storytelling.

Professor of Fine Arts William Blomquist said the show was easy to organize because most of the work was the same size.

“That leaves the viewer with the freedom to look for relationships in color, theme or continuity within the artwork,” he said.

The 2-D and 3-D imagery in the pieces worked together seamlessly to create a harmonious visual experience.

“You’re always afraid that people won’t understand your work, afraid that you haven’t explained it the right way,” said Blackmer-Blomquist, “but that fear is overridden by my need to tell a story.”

Although Blackmer-Blomquist’s pleasing artwork is no longer on display, the Art Gallery on the AWC Yuma campus continually displays the work of different artists.  In April, the exhibit will be of work by AWC students from this semester.

“You might see something that may make the visit worth it,” said Blomquist.

Besides the satisfying cultural experience, a visit to Room 110 in the Art Building (AB 110) supports the hard work of our local talented artists.  “See” you there!