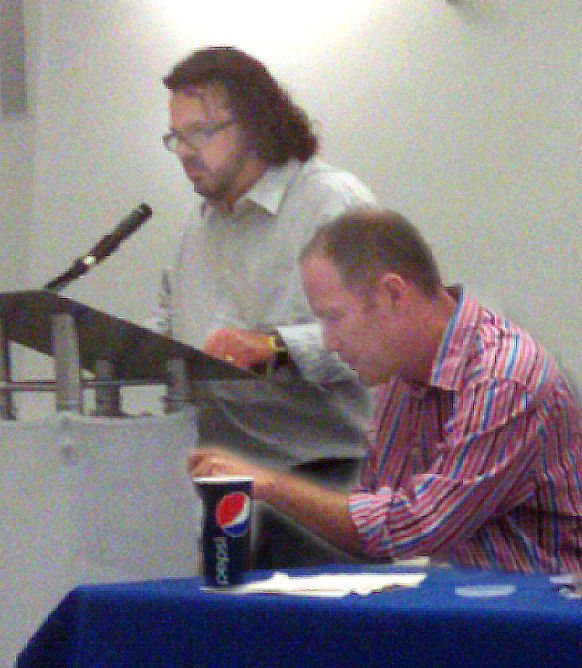 It all began with a dare. Professor Richard Jahna dared Rick Moody via Facebook to come down to Yuma and discuss his work. Moody took him up on that dare and came down on February 16.

Rick Moody is best known as an author, a memoirist and a musician. He has a grand total of nine published works and one of them, The Ice Storm, was made into a movie. His latest work is called The Four Fingers of Death, set in nearby Tucson.

The first event of the day kicked off at 12:15, when Moody took questions from the audience. He answered all these questions in an amusing, genial tone, explaining aspects of his short stories and his other past and present work.

Most of Moody's work was written at a time when he was coping with the loss of his sister. In his memoir, The Black Veil, Moody describes trying to write the book as difficult. "It was incredibly hard to do because I had to tell the truth," Moody says. "I hadn't realized how much of a private person I was."

During the six-month writing block with The Black Veil, Moody published Demonology, a collection of his short stories. In this book Moody felt it was easier to write about the death of his sister. One short story in particular, Boys, was about brothers coping with the loss of their sister while growing up.

Moody also took on questions about life as an author and obstacles they have to go through. "I knew I wasn't a great writer," he said. "I wasn't born with a gift, but I also knew I was great at sticking to it."

As for advice for future writers Moody said to expect heartbreak. "My first book, The Garden State, was rejected twenty-one times," he muses. "It was when I was about to give up that someone took a chance."

Moody finished off his stay in Yuma with a final reading from his book The Four Fingers of Death.

Those who attended the event felt truly awed to have an artist of such stature visit us here at AWC and we are grateful for his visit.