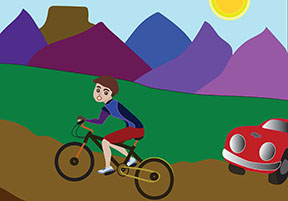 Yuma is a decent-sized city. People tout that it is not too far from San Diego and Phoenix, and that the weather is nice in the winter. One thing you're unlikely to hear, though, is how bicycle-friendly Yuma is.

In fact, for the most part Yuma is a scary place to try and ride a bicycle. The roads in the immediate area of Arizona Western College do have bike lanes, and AWC installed additional bike racks not long ago. But if you want to ride a bike to town or out to the Foothills, that's when things get tricky.

Highway 95 doesn't have any bike lane. The shoulder is almost non-existent, it's bumpy and half the time it's covered in mud from the tractors working in the fields. The area off the road is dirt, mud or gravel, so riding there is not even an option if you are on a road bike.

North Frontage Road seems like a good way to get out to the Foothills or even to make your way towards town. But, again, there's no bike lane, and the shoulder is full of dips and deep gravel, and it makes for a hellish ride.

While there are some nice places to ride in town for recreational purposes, the roads are generally dangerous to commute on. Arizona Ave. has signs that read "Bike Path," but there isn't even a shoulder, much less a bike lane. The bike lanes that do exist in town are often blocked by parked cars or debris, or have storm-drain grates on them.

To my knowledge there are no dedicated separate bicycle lanes anywhere in Yuma. By that I mean bike lanes that have a physical barrier separating bikes from car traffic and protecting the cyclist.

With our climate, it is possible to ride a bike all year long. If we had better bike lanes and safer roads for bicyclists, it would mean less car traffic and fewer accidents involving cars and bicycles. In all likelihood, we would also have healthier citizens.

Bicyclists by law can use as much of the lane as they need to be able to ride safely. If the right edge of the road is blocked or dangerous, the bike rider needs to be able to ride closer to the center of the lane. Riding on the sidewalk is not safe, but many car drivers do not understand this and get enraged that they have to take a few extra seconds to slow down and make room for a bicyclist.

It is my hope that Yuma bicyclists become more vocal and push local government to act and make Yuma's roads safer for everyone.