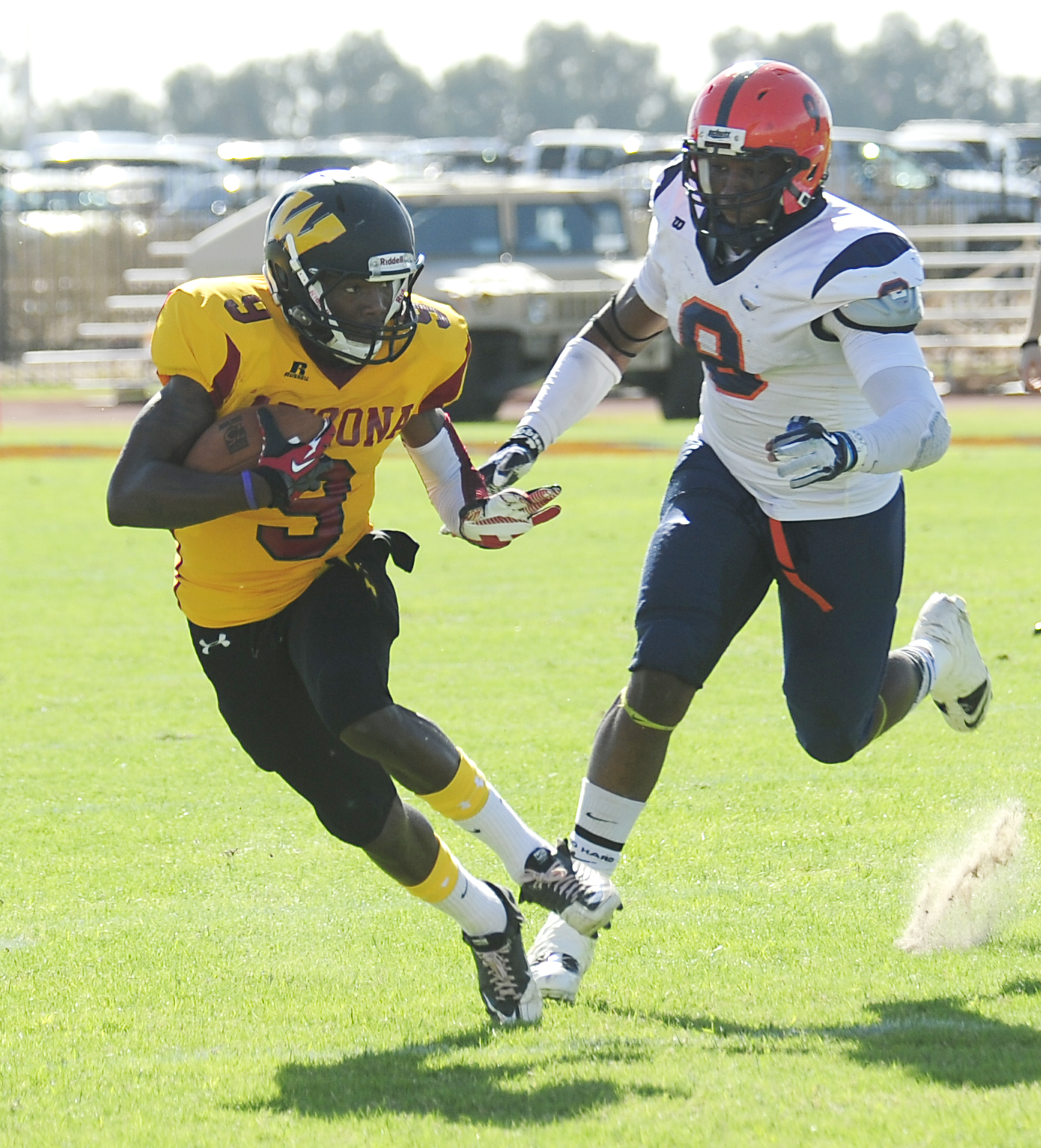 In a battle that featured more than 800 yards of total offense, the 12th-ranked Matadors of Arizona Western College defeated the 6th-ranked Lions of Nassau Community College 42-37 in the 2012 El Toro Bowl -- presented by Alexander Automotive Group -- at Veterans Memorial Stadium in Yuma on the afternoon of Dec. 1. It was the first postseason football victory for the Matadors since 1972, spoiling the Lions' hopes for a win in their first bowl appearance since 2004.

Bowl organizers and the nearly 3,000 fans who packed into "The Vet" Saturday could not have asked for better weather -- 76 degrees and sunny at kickoff. That was an element that the Lions -- who left behind 30-degree weather at their Long Island, N.Y. home -- originally welcomed when they accepted the invitation to make the 2,700-mile trek to Yuma.

Nassau certainly showed that comfort level in the first five minutes of the game, sacking Matadors' quarterback (and 2012 ACCAC Offensive Player of the Year) Tanner McEvoy twice in AWC's opening possession, forcing a "three-and-out." The Lions then took the ball and efficiently marched down the field on their first possession, going 50 yards in eight plays to score the first TD on a 20-yard run by Lions' quarterback Jordan Rodriguez.

For a team that has spotted its bowl opponents double-digit leads to start the game three years straight, that quick opponents' touchdown might have sent shock waves through the Matadors' bench. Instead, the Matadors' defense stiffened, holding Nassau without a first down in the Lions' next three drives, allowing AWC's offense time to find a rhythm in the final stages of the first quarter, mounting a 10-play, 61-yard drive that culminated with a 17-yard TD pass from Tanner McEvoy to Shaquan Curenton to tie the score at 7.

The 2nd quarter was dominated by scores off opponents' offensive and special teams' miscues. The first mistake was a Rodriguez pass that Matador safety Pat Martin anticipated well, stepping in front of the intended receiver to pick it off and scamper 40 yards to the end zone to give the Mats their first lead of the game.

AWC would keep the lead until the final three minutes of the half, when Lions' linebacker Thomas Joyce returned the favor by anticipating a McEvoy pass and taking the interception 92 yards the other way for a TD that would tie the score at 14. Undeterred, the Matador offense got the ball back and efficiently marched 78 yards down the field in just five plays, with tight end Emmanuel Bibbs taking a McEvoy dump-off pass and eluding five Lions' tacklers en route to pay dirt for a 35-yard TD.

The special teams fireworks would ensue in the remaining moments of the half, when Nassau's offense again failed to pick up a first down after three plays. The 4th-down snap sailed high over the head of Nassau punter John Scelfo, allowing Matador defensive back Dominique Blackmon to scoop up the loose ball at the Nassau 6 and take it in for the lead.

The Lions would respond, though, rolling from their own 21-yard line to the Matadors' 24 in just 47 seconds, allowing Nassau kicker Tyler Simon to boot a 41-yard field goal as time expired, cutting the AWC lead to 28-17 at the intermission.

Whatever pep talk first-year head coach Curtis Guilliam delivered to his Nassau team at halftime was very effective, since the Lions took the opening 2nd-half kickoff and went 79 yards in just 6 plays, capping off the drive with a 13-yard TD run by their leading rusher on the year, Louis Johnson.

Once again, the Matador offense responded to the shift in momentum emphatically, marching from their own 20-yard line to the Nassau 47 in seven plays, and watching Yuma-area product J.C. Baker finish off the drive with a 47-yard sprint to the end zone to extend the Matador lead back to double digits.

Nassau appeared to be on the way to answering back until Matador linebacker Raahmil Brantley reversed the momentum with a 10-yard sack of Rodriguez near midfield to stop the drive. That gave the Matador offense a chance to use the Yuma heat to their advantage, wearing down the NCC defense by chewing up yardage on the ground with the power rushing attack of McEvoy (25 yards on two rushes), fullback Demont Buice (26 yards on two carries) and some trickery (McEvoy with a backward pass to left tackle Jaylen Hunter, who rumbled 24 yards on his first run as a Matador). That set up a McEvoy-to-Baker TD screen pass for 8 yards at the beginning of the fourth quarter to give the Matadors their biggest lead of the day at 42-24.

Feeling the urgency, the Lions' offense returned serve with an 11-play, 79-yard drive that found the end zone when wide receiver Antwone Grant threw a 21-yard option pass to fellow wideout Malachi Lawrence to cut the AWC lead back to eleven points.

Minutes later, Lions' linebacker (and 2012 NFC Defensive Player of the Year) Amara Kamara intercepted a McEvoy pass and returned it to the AWC 1-yard line, allowing Rodriguez to cash in the turnover five plays later on a fourth-down, 1-yard TD run and make it a 42-37 Matador lead (the Lions' 2-point conversion attempt being unsuccessful). Nassau seemed to build on that momentum when penalties reared their ugly heads for the Matadors, negating a long Andre O'Neil kickoff return with a holding call, and backing the Matadors up to their own one-yard line on false start infractions.

The Matadors then showed how much they wanted to bring their head coach, Tom Minnick, his first bowl win at AWC as they gradually chewed up yardage and clock, converting a 3rd-and-10 from their own 5-yard line, then using nine consecutive positive-yardage runs by Buice, Baker and McEvoy to take the ball inside the Lions' 5-yard line and run out the clock to ice the 42-37 victory.

The win gave Minnick his first bowl victory since he coached Joliet Junior College in Illinois (2007), and ended three previous years of bowl frustration for the Matadors. It also gave the Matadors an 8-2 overall record in 2012 while also notching their 38th win over the past four years combined -- the most wins in any four-year stretch in Matador Football history.

McEvoy was named the Matadors' El Toro Bowl Offensive Most Valuable Player after completing 18 of his 24 pass attempts for 245 yards and three touchdowns, and also rushing for 51 yards on nine carries. Matadors' linebacker Sam Wren earned the team's defensive MVP award after racking up his 14th sack of the season in the first quarter, and pressuring Rodriguez nearly all afternoon.