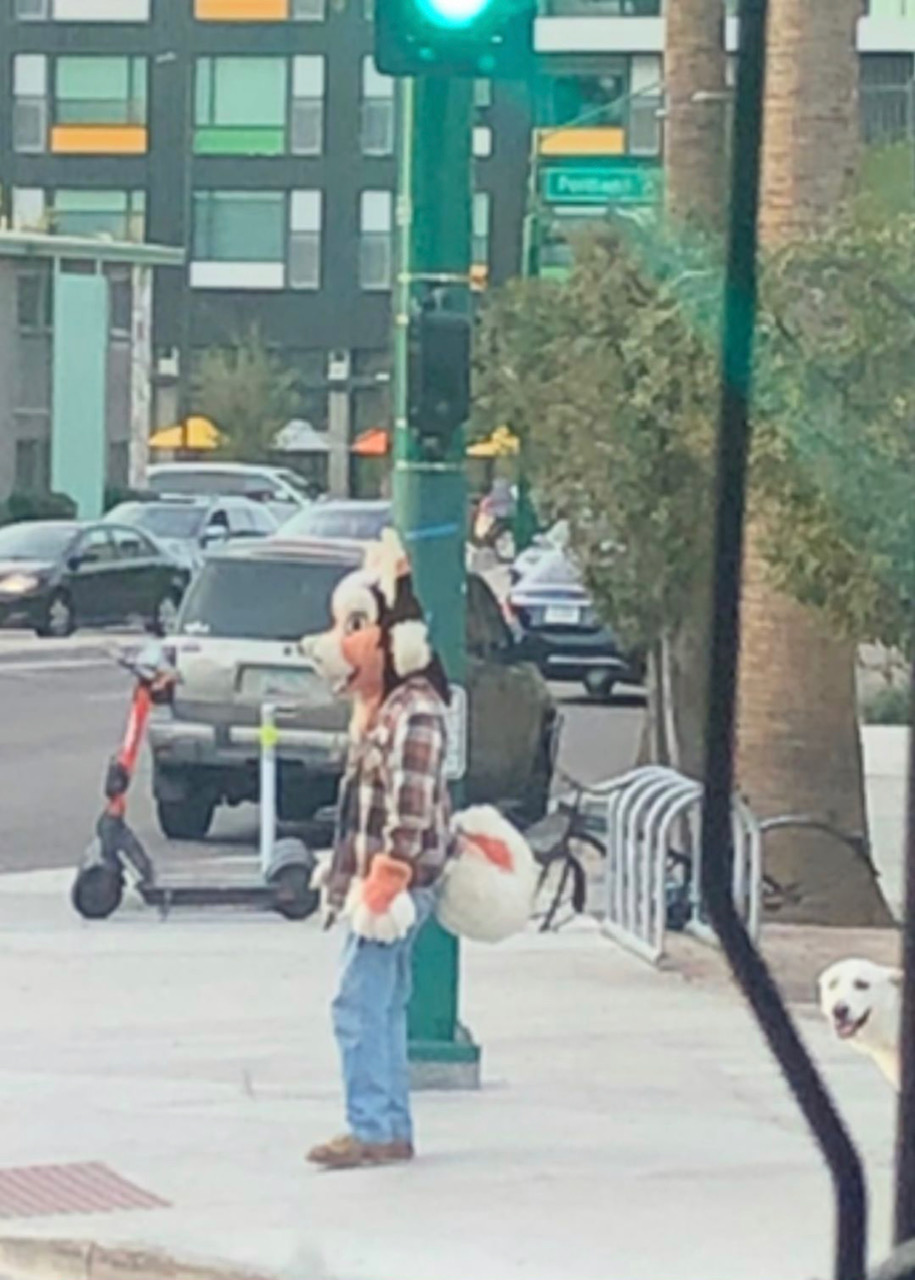 A furry is sighted in Downtown Phoenix, Arizona

Cuddling with the furry community

Like so many events, Anthrocon, the world’s second-largest furry convention, was canceled because of COVID-19. Needless to say, the 7,000 “furries” who attend the event annually are deeply disappointed.

They may be severely restricted in their activities, but on a positive note they are taking this quarantine as an opportunity to create and share even more with others, like drawing more furry characters, trading with other artists and trying out new things.

A furry is someone interested in anthropomorphic animals with a mixture of human and animal characteristics, such as those found in popular children’s cartoons like Looney Tunes, Pokémon Digimon and a variety of Disney films like The Lion King, Robin Hood and Zootopia. Furries like to express themselves by making costumes, writing stories, drawing, animating and dancing.

“I like being a furry because it is my creative outlet, and I like making people smile with my art,” said furry artist Aero Husky.

Most furries like to “cosplay” their own characters, called “fursonas,” using them to represent their own personality traits or ones they wish they had. These fursonas are usually made into fursuit costumes, like the ones made for school mascots, to be worn at furry conventions.

“I wear my suit to everything I can,” said Melonlor, a fursuiter and artist. “Being a former mascot, I’m trained to know how to handle kids, and I always make sure to have positive interactions with them.”

Not many furries can afford fursuits, which cost between $400 to $5,000, depending on the quality and experience of their makers. Buying individual parts like ears, tails, paws and feet is cheaper, although heads are expensive and may cost between $40 and $1,600.

A furry with the nickname Bo, who makes a living on fursuit commissions, explained that the furry community is partly about making a living, as the fandom is filled with creative and artistic people who like to share and create.

“I recently purchased a new character, and I absolutely love it to bits,” said Evie_drawz, a fursuit maker and artist.

Some furries like to draw their fursonas and then trade them or sell them; others who can’t draw pay a commission to furry artists. Furries also create and sell props, short animation, badges, stickers, pins, sculptures, plushies and onesies.

“It’s a fun place to draw art for myself and others while creating universes and stories,” said Overly-Caffeinated-Wolf, a furry artist and writer.

“Furries aren’t what the media make them out to be,” says Aero Husky.

A couple of misconceptions are that furries really believe they’re non-human or mythological species (that is, “otherkins”) or that they have an animal fetish.

Furries don’t think they’re animals though they do act like them sometimes. Similarly, they have no fetish for animals, but they do love pets. Since 2006, the Anthrocon festival has been donating to animal shelters in Pittsburg and elsewhere.

“I saw my first furry anime called Beastars,” said Irene H. Navarro, a non-furry. “It was hard to get accustomed to the style at first, but now I can’t wait for the next season.”

“I’ve never met a furry, but if it makes them happy and they aren’t harming anyone or themselves, then let them be,” said Jasmine Serpas, another non-furry.

Many people simply don’t know anything about the subculture.

“My parents don’t even know what furries are, and they think my fursuit is a cool costume I made for Comicon,” said Kayla Martinez.

“The furry” is a friendly community that accepts all kinds of people – even the non-furries, or “normies” – and many find comfort inside the fandom. Many LGBT people feel at ease there, and some others aren’t afraid to admit they are mentally ill.

“I enjoy being a furry because this is a community that doesn’t judge you for who you are,” said Picasso, a furry artist.

“This community is my anchor,” said Aero Husky. “I struggle with mental health, and these people are my family and they really help me and support me.”

“I’m actually a furry, forgive me,” Oj-Is-Potato posted in the Furry Amino app when she came out as a furry in 2018.

Most participants are afraid to admit publicly that they are furries because they might lose their friends, or their family will misjudge them. A furry with the username Bubba also made a post in Furry Amino asking his friends how to tell his parents.

“How do I come out as a furry?” he asked. “Because when they search up furry on Google, it just comes out as bad, cough furrest, cough.”