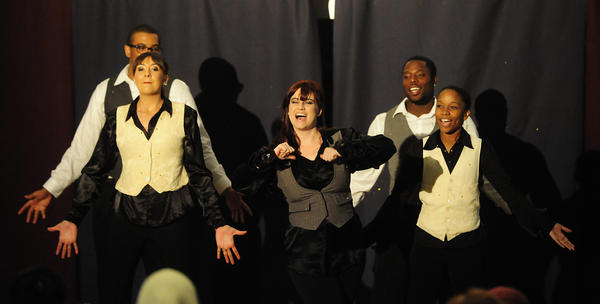 Multicultural Celebration: What a Wonderful World

This year's international and multicultural dinner/theater event "What a Wonderful World" certainly revealed Yuma and Arizona Western College to be a wonderful community of diverse cultures and talent.

On March 8 in the Schoening Conference Center at AWC, students, staff, faculty and local residents came together to produce an entertaining evening of fine and performing arts with international fashions and cuisine representing the diverse global connections that enliven the campus and community.

Directed by International Programs Director Ken Kuntzelman and by Student Leadership & Activities Coordinator Shara Roberts, the I-Team, AWC's International Club, and the AWC Student Government Association assembled a cast and crew of more than 70 to produce this annual event.

The evening began with a Caribbean dinner buffet catered by Sodexo of AWC and augmented by the sweet and savory delights of Middle Eastern traditional foods donated by the Muslim Sisters of Yuma Non-profit Organization (SYNPO). Guests were treated to colorful tables decorated to represent countries and cultures from around the world. The entertainment began as Ken and Shara welcomed guests and introduced the student MCs for the evening, Carlos Ramos and Araceli Acosta. They charmed the audience and anchored the show with their insights and introductions of more than 30 performers.

Local student Kamyla Ruiz sang the popular Korean hit "Lonely." Soloists Jose Reyes ("Fly Me to the Moon") and Brianna Huges ("I Dreamed a Dream") brought a bit of Broadway to the stage, and piano solos were performed by Kinsey Phillips (Whisper in a Thrill) and nine-year-old Alison Crilly ("The Entertainer").

Madelein Rodrigez coordinated a student art auction and, after intermission, Acosta teamed up with Phi Theta Kappa chapter president Zaynab Hourani to moderate and participate in the Wonderful World Fashion Show, featuring an array of traditional clothing modeled by a cast of 25 students and faculty. SYNPO helped to coordinate costume contributions from community members with roots that span Northern Africa, the Middle East, and Southwest Asia.

Two group numbers rounded out the highlights of the evening: "Count on Me," by the KEYS staff of Director Michelle Thomas and Coordinators Laura Shepherd and Carlos Ramos, and the joyful traditional Vietnamese harvest song "Buc Hoa Dong Que" (Picture of the Countryside) by international students Dung To, Hanh Pham, Tam Dang, Nhung Nguyen, Tu Tran, Nhi Nguyen, Cuong Do and Thu Pham. AWC Police Officer Caryl Thompson brought down the house in the final act with his energetic performance of "Pirates of the Caribbean" on piano.

Finally, all the performers assembled on stage to begin singing a very well-known song, and the evening came to an emotional conclusion as the cast mingled with the guests and encouraged them to join in singing a rousing rendition of Michael Jackson's "We Are the World."