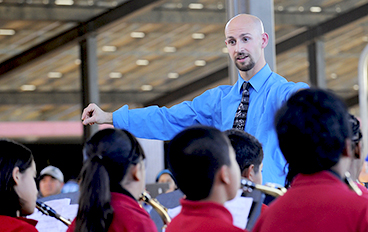 A night for the kids

With all the food, the live shows and the friendly atmosphere, there was always something to do at Arizona Western College's Somerton Educational Family Night at Somerton Middle School on February 24.

While some booths had food and games, some also had information. For food, there were baked goods, tamales, nachos, burritos, bolis (Mexican popsicles) and tortilla chips, maybe with cheese over them.

Northern Arizona University was also there showing kids what they had to offer, for when the time comes for them to think about college.

Some of the live acts consisted of cheer, singing, dancing, Judo, violinists and the middle school band. According to some of the bystanders, the SMS cheerleaders were "great"; and the dancers were "amazing" and "brought out the Mexican culture." The musicians -- the singers, the violinists and middle school band -- were cute and seemed to have a passion for their art.

"It was really great to perform with my sensei," said Alex Lastra, an AWC student who was a member of the judo group. "He took me out though, so I still have some learning to do."

As the community came together for this night, some of AWC's own clubs were there as well -- Rotoract, the Running Club, the AJS Club, SGA and the Early Childhood Education Club.

"My favorite part was seeing the whole Somerton community come together to support their junior high and college while having a fun time doing it," said Yaiven Ybarra, a member of SGA and the Running Club. "Another was watching the performance done by the junior high kids, which were cute," he added.

This night was for the kids, and they took full advantage of all the information. It's never too early to start thinking about where you'd like to be in ten years.