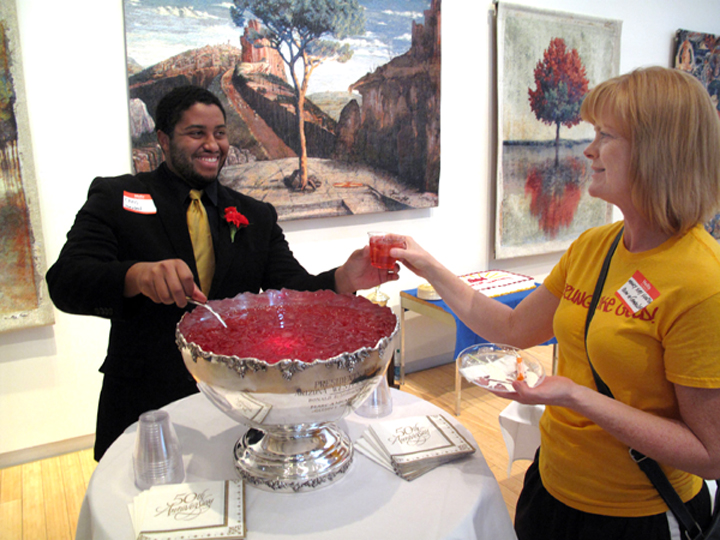 Rock around the block

On Saturday, February 15, AWC and NAU-Yuma took their anniversary celebrations (50 years & 25 years, respectively) to Main Street with a block party and reception.

A wide variety of academic and career tech departments got into the act with booths, demonstrations and performances in the 100 block of Main Street as part of the City of Yuma's River Daze block party. Massage therapy hosted a booth of chair massages, Welding demonstrated ornamental blacksmithing, Communications faculty invited haiku writers to enter a contest, and Math students encouraged patrons to work out puzzles, get a face painting or play ping pong.

On the main stage, college students thrilled audiences with performances in choral singing, jazz music, belly dancing and karate. The 23 tented booths were bookended by the performance stage and by the AWC 50th Anniversary float, which resembled a 17' tall cake, and was designed and decorated by Student Government members and various clubs. The float made the rounds to a half dozen local parades and events, and won the Veteran's Day parade prize in its division.

Invited guests from near and far celebrated the AWC-NAU-Yuma relationship at an hour-long reception in the near-by Yuma Art Center, complete with punch out of the historic President's bowl, cake, and other refreshments. Retired NAU President Dr. Gene Hughes, who helped formalize the relationship in 1962, drove down from Flagstaff to be part of the proceedings. Student leaders and faculty enjoyed mingling with AWC and NAU leadership from today and days past.

The event was yet another way in which the partner institutions have been reaching out to the public this year in celebration of their many years of existence, and another way of thanking the community for its ongoing support.