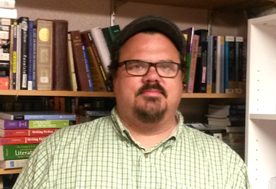 Well, his rolling suitcase, anyway. He'll be heading to India for the Fall 2014 semester to teach and conduct research, having become only the second AWC professor ever to win a coveted Fulbright Scholarship.

The Fulbright Scholar Program is administered by the Council for International Exchange of Scholars (CIES) -- the United States flagship academic exchange effort on behalf of the United States Department of State.

"This global reach and extensive expertise have earned CIES the reputation of a world class organization superbly knowledgeable of and connected to the scholarly community around the world."

Last summer Jahna spent six weeks teaching at a boarding school in India and working on his Fulbright application, a long process requiring recommendations, an outline of the purposed project and a sample syllabus. He will be hosted in Fall by the University in Ranchi in the state of Jharkhand, where he will be recording the historical movement of young Indians and their experience in navigating the New India.

India is an important economic and technological force in the 21st Century, so their story will be historically important. The young people are in a great transition period between traditional values and cultural expectations as they are now influenced by Western popular culture through movies, music and clothes.

An important aspect of this change is the role of women, as there is a loosening of traditional gender roles for young people. Jahna notes that the young people are very optimistic for their future. It is this landscape of changing cultural adaptation and the friction that such changes can cause that he will have his students analyze and write about.

Jahna has been inspired to write since the tenth grade, when he started his first science fiction story. He grew up in the South listening to an older generation tell stories of events past and current, real and imagined.

Jahna has had several short stories and poems published in literary journals. The short story collection he wrote for his Master in Fine Arts (MFA) thesis, True Kin, also has been published, and the critical introduction to his doctoral thesis will be published soon. He hopes to have the novel he wrote as his dissertation published by the end of the summer.

Like many students, Jahna started college still searching for his career path. He eventually realized that what he enjoyed the most was literature and writing. In 2003 he earned his Master's in Literature and went on to earn a MFA in Creative Writing. In 2012 he received his Doctorate in Creative Writing from the University of Louisiana in Lafayette.

Receiving a Fulbright scholarship, Janha says, enhances his own literary journey as well as his academic career. He looks forward to publishing the anthology of his students writing. During his time in India he will also be working on another novel.

Jahna's best advice for students is to travel whenever the opportunity arises.

"One great things about travel is it takes you out of your comfort zone," says Jahna. "Travel forces you to shuffle your preconceptions and to think about things in a new way. When you are able to travel with a project in mind or with an educational objective, you are able to gain the individual enrichment from immersing in another culture.

"You are also able to bolster your resume," he adds.

Jahna also stated that students should know that the Fulbright scholarship is available for recent college graduates as well as established academicians, "so plan ahead."