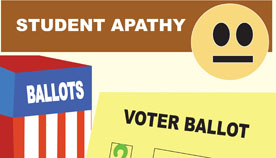 Ever wondered why college students seem reluctant to take part in democratic elections? These days, there seems to be an ever-more-apathetic view of politics, especially among young adults and college students. Does this ring true for the students at Arizona Western College?

In our democracy, surely students should let their opinions be known and one of the best ways to go about that is to go out and vote! However, the vast majority of AWC students don't participate in any national, state or local elections. What has kept students from taking charge in our democracy? The main reason is that they lack interest or are uniformed about politics.

As reported in the 2012-2013 Arizona Western College Fact Book, 100 AWC students were surveyed using a quota sample -- a sample of the students that most closely represents the AWC student population (excluding those who are ineligible to vote in the U.S., such as international students, those under the age of 18 or those who recently turned 18 and could not register in time for elections). In all, 76 percent of the students polled haven't voted or plan to vote.

Forty-five of the 100 students admitted that they lack interest in politics or they simply don't care. Ten students said they think that their vote doesn't matter anyway, so why should they waste their time?

"No I don't vote because I feel the system is corrupt and there is too much corporate money influencing politics," says a psychology major Jacob Santa Cruz.

Another student, engineering major Daniel Buitrago, says, "I don't vote because I'm just not interested in politics or that sort of thing."

Only 9 out of the 54 females polled said they do participate in elections, compared to 15 out of the 46 male students polled.

Terra Bickham, a business major, speaks for most of the female student population, saying, "I just don't care. I'm really not that into it."

The remainder of the students who don't vote gave various reasons, such as busy or conflicting work and school schedules, inconvenient polling locations, transportation problems, trouble registering or even uncertainty about the day of elections. Others disliked the choice of candidates or didn't know enough about them to make a well-informed decision.

So what about the other 24% who do cast their ballot? Of those who vote, the majority, 15 of the students, said they vote because they feel it is their Constitutional duty.

"My father always stressed the importance of voting and letting your voice be heard," Blake Boyer, a business major, "especially in the local elections."

Carmen Balbuena, a nursing major, states, "Yes, I vote because, even though many people don't believe that one vote makes a difference, it's important to voice your opinion, no matter how small it may seem."

Other students vote because they are interested in politics, they feel inspired to vote and they believe it will make a difference. One student added that early voting by mail makes it a lot easier now to cast a ballot.

Those students among the voting ranks will say that not having an interest in politics should not be a reason to neglect this privilege that is granted to many, but taken advantage of by so few. It is the only way, they argue, to ensure that our voice in democracy is heard.

Before November, we all still have time to get informed on who's running, on what they stand for and on which candidate out there best shares our values. Each vote represents the power to make a change.