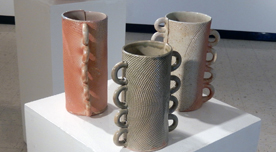 The favorite time of the year for staff members to show off an artistic ability had finally arrived at Arizona Western College.

On September 3, a reception was held in the AWC Art Gallery in honor of the faculty show on display in there. The free event featured lemonade, fruit punch and cookies as well as performances and exhibits by various campus groups outside the building.

Several dozen art fans took in the events, including whole classes that had been brought to celebrate the creative process.

The exhibit included everything from a photo slide show to a skeleton structure made of real animal bones, yarn, wood and glue. There also were pictures made of acrylic as well as hanging dresses cross-stitched from fabric.

Another prominent display was the wood-fired porcelain ceramic drinking vessels made by Steve Dilley.

"I have always liked to look at other people's cups, and I have always wanted to make my own," said Dilley. "So I did just that."

At the entrance to the Gallery sat a live string ensemble from the AWC Music program.

Outside under the trees, the Drama club put on a brief performance based on The Great Gatsby, as a preview of what they will be performing in mid-October. The students were dressed in 1920s costumes with long dresses and fancy suits and had many props involving the era. As a live display of artistry, members of the Art Club, which helped set up the exhibit, were outside drawing, and a huge graffiti board was available to anyone who wanted to draw something.

The League of Artists also had their share in the proceedings. "I joined to further my views of art, to be part of events like these, and much more," said League member Briana Hendrickson.