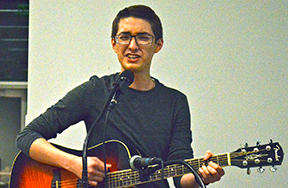 One mic, many cultures

A perfect showcase of how diverse our community and campus truly are was Open Mic Night, when students, staff and community members from all walks of life came out to perform on February 10 at Starbucks in the 3C building. The event was hosted by the Student Support Services' KEYS Keep Envisioning Your Success program and the CAMP College Assistance Migrant Program, both of which provide academic-development opportunities to low-income, first-generation and disabled students.

"This is our sixth Open Mic Night so far," said KEYS Program Coordinator Laura Shepherd. "We try to do one every fall and spring semester so we can expose our students to the cultural diversity in our area."

From a traditional Hawaiian dance to a Beatles-esque cover band to an American Sign Language demonstration, there was diversity indeed.

"I love being able to stay connected to my culture," said Hayley Hennelly after wowing the audience with her traditional Hawaiian dance, complete with a hula skirt and lea. Hennelly, 23, an employee of the 3C Starbucks, is originally from Hawaii but moved to Yuma when she was seven. She began practicing Pacific, Tahitian and Samoan dance four years ago with the Hui O Hawai'i of Yuma Hawaiian Dance Group.

Lucky enough to open and close the show was the Original Conners, an up-and-coming local band. With Jacob Cong, 16, on lead vocals, Anthony Gonzalez, 17, on the bass guitar, Seth Ortiz, 19, on backup vocals and guitar and Ben Dalton, 17, on percussion, the young men played several popular covers and a few tunes of their own.

When speaking of their musical influences, including Jimi Hendrix, the Beatles, Led Zeppelin and Green Day, Cong laughed, "We come from all walks of life!"

The Original Conners were buzzing after their second set, commenting that the crowd of 40-plus students and staff was one of the biggest they had played for yet.

Changing the pace for the evening was Lizet Camarena, 20, a first-year AWC student and AJS major. Camarena is currently enrolled in ASL 101 and shared her knowledge of the subject by instructing the audience how to sign the Pledge of Allegiance.

Camarena, who has a mute sister, said, "Growing up, I felt her pain when trying to express herself. I've also always wanted to be a lawyer so I put the two together."

After finishing at AWC, Camarena hopes to transfer to a university and eventually go on to graduate from law school and represent the deaf.

Other acts of the evening included a spooky monologue reading, covers of Linkin Park, Meghan Trainor, and Frank Sinatra, a DUI goggle demonstration and a French sing-along. When looking around at the evening's performers and the crowd, Rafael Encinas, an advisor for CAMP and the master of ceremonies for the evening, stood back and said, "There is so much cultural awareness available for our students here tonight.