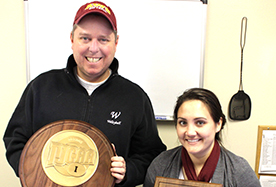 Jason Smith has a passion for volleyball. Last season was his 23rd year coaching for college volleyball, 7 of which have been at Arizona Western College.

When Smith was in college, he got to play as a walk-on. He didn't have a scholarship.

In his sophomore year, he broke his ankle during play. Even though he was injured, he still got to stay with the team, and he was able to attend the 1990 Goodwill games, an international competition held in Seattle.

He began as an assistant coach in Kansas City, Mo., at Alva College, which the year before had a 6-38 record. With Smith as the new assistant coach, their record went to 21-21.

The following year, the Alva head coach quit, and Smith took over. From there, he transferred to Rockhurst University as a volunteer, then went to Iowa Western and then to the University of Utah.

This season at AWC, Smith only had 10 players on the team.

Having a full practice was difficult since it would be 5 on 5. Sometimes the coaches or even the student manager had to jump in just so the volleyball team could have a good practice. Under those circumstances, the team had to be vigilant in avoiding injuries, but they managed to pull through.

Their most memorable game this year was in Nationals, when they played Western Nebraska. Both teams had only 10 players, and both wanted badly to win. AWC was down at first, but in the end they got the win.

Here is a partial list of last season's individual honors for AWC:

"If anybody asks where I have enjoyed coaching the most, it's here," Smith says without hesitation.

Yuma is his new home, and he doesn't imagine leaving. After last season's success, he looks forward with relish to the coming year.