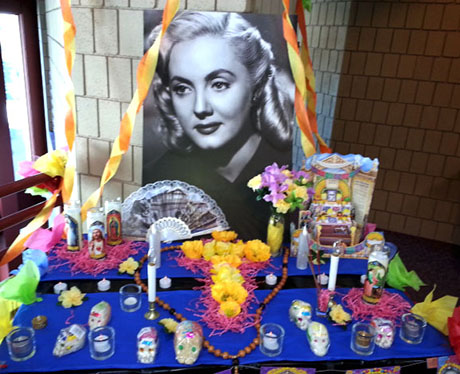 Altar for a black angel

A colorful pathway of flexible flowers, vivid paper cutouts with welcoming graphics and the sweet aroma of bread guided visitors to the altar of Emilia Guiu in the NAU Academic Center on the campus of Arizona Western College.

Background
Emilia Guiu was a famous Spanish-Mexican actress during the 1940s and ë50s. Her roles in more than 50 films between 1940 and 2000 had a major impact on the Golden Age of Mexican cinema. This all-time star moved to a quiet life in the U.S. and was even an AWC student.

Guiu was born in Spain in 1922. The Guiu family left Spain during the Spanish Civil War and moved to Mexico in 1943. Acting on stage, she landed her debut in Flor Silvestre in 1943. Her career progressed into films and Telenovelas in roles as villains and femme fatales.

Some of her famous films were Soy un Profugo with Mario Moreno (aka Cantinflas) and Angelitos Negros with Jose Carlos Ruiz (or Pedron Infante). Her last TV appearance was in 2000 in Abrazame Muy Fuerte, a long-running telenovela. However, after all her fame she sought a peaceful life.

Between 1960 and 1980, Guiu attended AWC, taking classes in jewelry making and quilting. She also helped in the Yuma Regional Medical Center as one of the "pink ladies," who volunteered as part-time nurses or aides, helping patients or helping the nurses with handy work. Sometimes, these pink ladies made quilts or ornaments for patients to cheer them up.

After her retirement, she dedicated herself to raising her six children in Gadsden, Ariz. She passed away at the age of 81, survived by her husband Abraham Piceno and son Abraham Piceno, Jr.

A high tribute
At AWC, Michael Sabbath, CAO of the NAU branch in Yuma, wanted a memorial in Guiu's name and had it placed on the NAU building's second floor. With the help of Francisco Valenzuela as tech support, AWC students and staff collaborated on this memorial trail and altar and even a PowerPoint of Guiu's life.
The altar and ornaments were hand made by a group that included staff and ten students as well as Dr. Amalia Garzon, professor of Spanish at NAU. From Oct. 27 to Nov. 6, the altar stood in high grace for anyone willing to pay respects or appreciate its beauty. Decorated with candles, the altar housed many offerings by students, staff and outside visitors. Pan de Muertos, candy skulls and even a fruit basket surrounded her framed photo, which featured her passionate gaze.

The San Luis Film festival, organized by Antonio Carrillo this past November 18-20, was in honor of Guiu, celebrating with three of her films. The festival attracted more than 300 people, casual moviegoers and professionals alike, and some of the movie stars were invited to take part. However, there was no doubt that Guiu's presence could be felt watching over everyone, with portraits of her career and life-size cutouts given as raffle prizes.
Viva, Emilia!