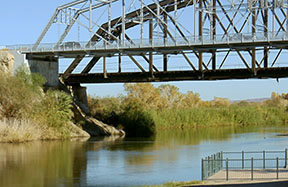 Since Arizona received statehood in 1912, the small city of Yuma has been battling metropolitan Phoenix over the limited water from the Colorado River. Up to now, Yuma's water supply has been safe due to the first-come-first-served policy that was established when Arizona became a state. However, due to the growing population, a decrease in water flow and now climate change, the river faces many problems.

"The major effects of the decrease in water flow for Arizona are mainly agricultural," says Tia Fritz, a teacher at Gila Ridge High School and an instructor of Environmental Science at Arizona Western College.

On Nov. 12, 2015, the Arizona Supreme Court ruled that local governments have no inherent right to block the transfer of water and water rights out of their area, and that a court only has to listen to arguments of the party that wants water rights to be transferred to their area. This was ruled in a case concerning Mohave County, but the effects can be applied to the water rights of the Yuma area. This is deeply troubling to many who work in the agriculture business because it means they may have to reduce water usage more than they already have over the past decade.

Fritz has deep concerns about this potential transfer of water rights.

"It's crazy to me that they would try and take water away from us," says Fritz. "We may be smaller, but we are the ones who grow their food, so we need that water to make it possible for us to grow."

Indeed, Yuma is third in vegetable production in the U.S. and first in Arizona. Yuma's wheat, lettuce and other vegetables are shipped worldwide. With the Colorado serving more than 30 million people in the U.S. and Mexico and with projections of current and future devastation from climate change, it becomes very confusing for those in charge of dividing the Colorado's water.

Few problems are so imminently dangerous as the growing effects of climate change. It affects not only the air we breathe but also the water we drink, bathe in and use to grow food. Now more than ever due to the 30-year Western drought, we must do all we can to preserve this precious resource. It is imperative to learn and implement these simple and easy strategies. Here are four that Fritz has to offer:

It is the inherited duty of our generation to combat climate change, raise awareness and protect our resources for ourselves and our descendants. It is also imperative to fight for our water rights so Yuma can survive to feed people now and in the future.