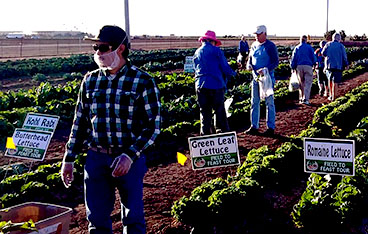 Vegetable capital of the world

The start of the year is busy for the Yuma Visitors Bureau, beginning with the Field to Feast program, which runs from Jan. 6 to Feb. 24. F2F, now in its fifth year, is a sold-out event with people registering as early as October, when the tickets go on sale.

"Yuma is the sunniest city in the world," said Dustin Mylius during a phone interview. "The bureau plans to continue with this annual event, and it's open to all," said Mylius. "Since it takes place in the winter time, it's an opportunity for our winter visitors to learn just how rich and fertile the desert soil has become."
Field to Feast, costing a nominal fee of $50, is a collaboration among local farmers, the University of Arizona and the Desert Chef's Culinary Club at AWC.
"The tour is to educate the public, and to receive an understanding of all the hard work that it takes for markets to receive the vegetables," said Mylius.
Guided by Kelly Uribe, participants take a tour of a few of the thousands of acres of agricultural fields in Yuma, which among them produce 90 percent of the leafy vegetables in the U.S. during the wintertime.

According to Smithsonian.com, Yuma is the "winter vegetable capital of the world."

On the tour the participants arrive at the 10-acre farm donated by UofA and pick a variety of vegetables, from purple cabbage to bok-choy.
"A person can participate in the tour a number of different times, and each tour is different," said Arlene Danser, a master gardener at the UofA farm located in Yuma at 6425 W. 8th Street in Yuma.

With two bags in hand, participants pick vegetables for about an hour and then deliver them to the Food Bank and to AWC, where culinary arts students wash and prepare them in various recipes under the supervision of chef instructors.

Dean and Ann Brittain said they have been coming to Yuma for years from Washington as winter visitors, but it's their first time on the F2F.
"It's a wonderful experience to learn about all the hard work that is being done out here," said Ann Brittiain. "No wonder the prices for vegetables and fruit are rising and getting very scary" said Dean Brittiain.

After the UofA visit, the bus makes a stop at a cauliflower farm owned by T and A Farms, where participants view the harvesting and the way the vegetables are packaged on site. There, T and A employees Alan Tanimura and Wendy Mckae join the tour to answer questions.

Four hours later, the tour reaches its final destination as the bus arrives at AWC campus for a lunch created from the vegetables that were harvested. The group is greeted by culinary arts students and Chef Young, an instructor in charge of the Culinary Club.

At lunch, participants are served anything from rice with mixed greens sautÈed in bacon to borsch. Borscht, a soup popular in Russia, has beetroot and tomatoes as its core ingredients, with sour cream an added favorite for taste.

The final guest speaker of the tour is a farmer's daughter, Bess Williams, who speaks of Yuma's agricultural facts and accomplishments in the industry.

"I love telling people what we do, and all the love that goes into it," said Williams.

The farmers volunteer their time in the Field to Feast in hopes of promoting their farms. The Culinary Club receives a percentage of the proceeds, which will go toward a trip to Portland, Ore., for a culinary learning experience.