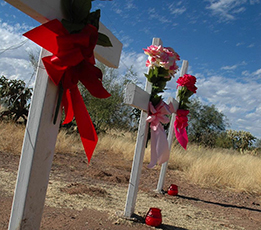 Photographs of descansos (roadside memorials) hung all around the room. As you look at each image, you can imagine the unfortunate death of each person, and a feeling of sadness overcomes you. You can practically feel the pain and see the tears rolling down the face of the person who has just lost their loved one.
Some of the descansos appear to be abandoned on a lonely road or hill. Each descanso is beautiful in its own way. Some include a cross with flowers, images of the deceased person, past personal belongings or quotes.
Brad Pease, the Graphic Arts professor at Arizona Western College, was the featured artist for February-March in the Art Gallery with his photography exhibit Descansos: Roadside Memorials.

Public displays of grief
Pease is passionate about photography, but especially about photographing descansos.
"Some are elaborate, where others are simple flowers placed near the site," Pease said. "Historically, descansos may have come from the funeral processions carrying the deceased for internment. During rest periods for the bearers, flowers would be placed along the way."
"The photographs examine grief, tribute and memories expressed by constructing these roadside memorials." He added.
"I was intrigued by the public display of grief," Pease said about why he started photographing roadside memorials. "I'm not familiar with it since I'm from upstate New York. I don't ever remember seeing one up there.
"These markers dot the roadsides in Mexico and in the United States," Pease said. "Some states have deemed them illegal because of the religious iconography and using public property to express religion.
Roadside memorials aren't as popular farther east in the country because the Latino populations are greater in the West, said Pease, adding that, "as Latino populations grow in the United States, traditions like these descansos have followed."
Pease has been photographing descansos for twelve years and is still going. "There are some photos in the Art Gallery that are 10 years old, since 2006," he said.
For a future project, Pease plans to look at census reports and at where Latino populations dominate. Once he has done his research, he plans to travel the Midwest to follow and photograph roadside memorials.

Juggling teaching and art
Pease earned his MFA in visual studies -- photo, book arts and digital media -- at the Visual Studies Workshop in Rochester, N.Y. He's been at AWC for fifteen years, teaching a variety of classes, including photography, art history, graphic communications.
"The energy level on both sides -- it's exhausting," he said about the difficulty of balancing teaching and being a photographer. "Photography involves lots of traveling, and it takes commitment."
Specifically, driving around looking for and photographing roadside memorials could take up a whole day, he said.
Pease runs his own blog for his photographs of the descanos (takko-descansos.blogspot.com) which he uses to find out the story of each descanso and of how the person died through research online or talking to the family of the loved one who has passed. He also has his own Facebook page about the descansos at www.facebook.com/descansomemorials