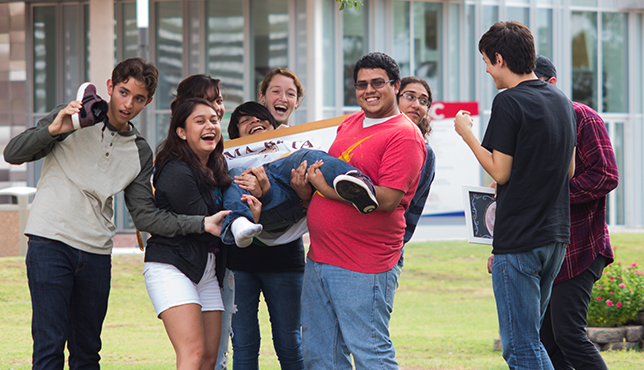 With 2016 being an election year, it is important to be politically aware because many of the decisions reached will affect us for years to come. For this reason, two Arizona Western College programs -- the college chapter of the Phi Theta Kappa national honor society (Sigma Beta) the International Program (I-Team) -- will be teaming up to create a one-day seminar for our local community.

The seminar will take place at AWC's main campus in the Schoening Center on April 19 from 5-6 p.m. and will feature presentations and a satirical play about the importance of the presidential elections, climate change and cultural diversity.

"I have long been concerned with climate change and segregation," said Nguyen. "These are global issues, but they cannot be solved at the governmental level they are not solved at the household level first. Therefore, I want to bring these issues to our community,"

Phi Theta Kappa President Keven Urbina commented that the partnership between these two clubs has been a long time coming.

"I- Team and Phi Theta Kappa are about bringing the leader out in everybody," Urbina said. "We're very passionate about this activity, and it may lead to collaborations between our clubs and even others in the future."

Phi Theta Kappa started a Sigma Beta chapter here in AWC in 1968. It was the sixth chapter formed in the honor society in the state of Arizona. They promote academic excellence and provide students with unique scholarship opportunities. They also participate in a conference every year with the other Phi Theta Kappa chapters in Arizona.

Phi Theta Kappa, which started its AWC chapter in 1968, promotes academic excellence and provides students with unique scholarship opportunities. The I-Team, which has been on campus since 2005, and was at first for international students only, but in 2010 it became open to all students interested in learning about other cultures and global issues.

The upcoming seminar is being put together by the students of both clubs, with AWC Theatre major Bianca Rollings writing the script. They hope to spark the community's interest and communicate the importance of becoming active in social issues.

"I encourage everyone to go," said Ken Kuntzelman, director of the International Program. "It will be enlightening and entertaining, and you will gain a new perspective on the elections and global issues."