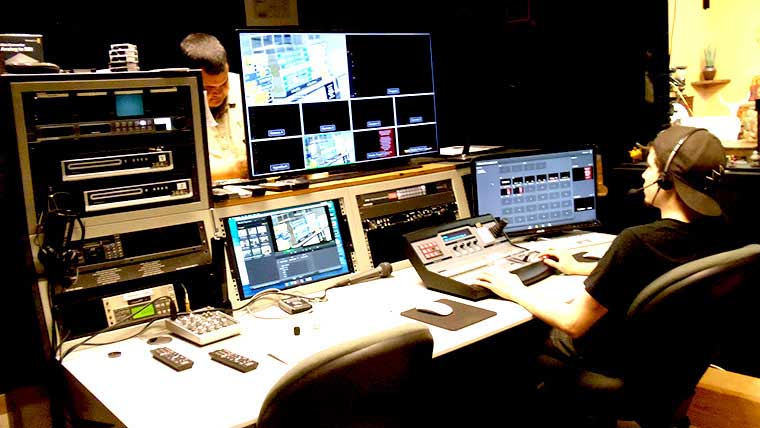 From live footage of sports to recording and editing major campus events, AWC Television Services always tries to produce the greatest quality for its viewers. In the past, though, that “best quality” was standard definition, and it became old news when high definition came along.

Sherry Needham, director of AWC’s Television Services, said AWC has had the current equipment since 2003, when they first started live broadcasting of sports.

“It was used equipment from an old interactive television system,” Needham said. “It was about twenty years old.”

The production truck is being converted into a HD digital vehicle for home games at AWC. Cameras and instant replay alike are being switched to digital. Even the switcher used to change in between cameras has been upgraded.

Until now, everything had to be recorded on a videotape before games. The recordings now go into a SSD (solid-state drive) card, and the signal also goes back to the studio to get recorded into a digital-media server. Sports events also go online for viewers to look back on after the stream is over. TV Services has shot other shows as well that are posted on the online playlist.

“Most of those things are done in HD now,” Baughtman said. “The only things that weren’t were being shot in the studio or truck.”

Besides AWC’s Commencement ceremony, sport games are the most viewed while streaming.

Even though TV Services is going through these changes for shooting in HD, the quality isn’t going to change on cable TV since Time Warner Cable gives AWC services only an SD signal on television. The HD quality, however, is going to show on AWC’s website.

Viewers aren’t the only ones benefiting from the upgrades on the equipment.

“I’m really excited for the new cameras,” said Isabel Ortiz, a TV services employee. “I’m short, so it’s going to be better for my neck.”

The field cameras she uses are set high with the monitors even higher. The crew has to be looking up at the monitors to be able to see the game and know where to shoot.

In the past, Ortiz had to watch games through a small black-and-white monitor while recording the game through her camera. But now, with color, the whole experience is easier and enjoyable for her.

New equipment also means new wires, and TV Services has been working hard to get ready for the next home game. Ortiz and other crew members are currently setting up the production truck, moving wires and replacing monitors. The next game will surely be HD.