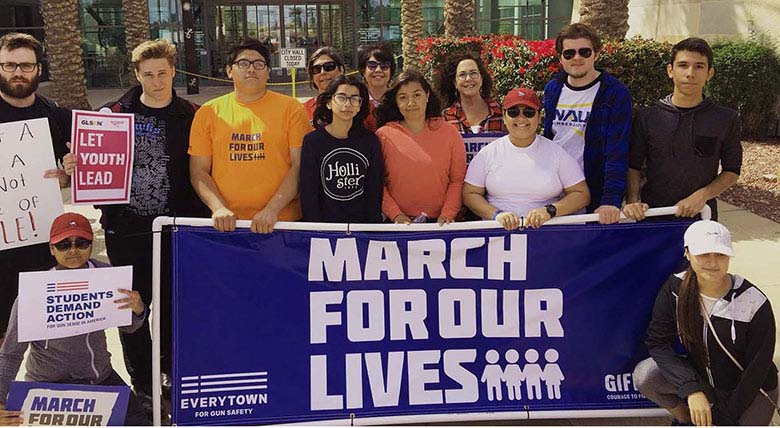 A return to progressive values. At least that’s the aim of the new Our Revolution AWC club at Arizona Western College. Formed last semester by Bryan Rasmussen, the club is a local chapter of a nationwide grassroots organization that Vermont Senator Bernie Sanders founded after his run for the 2016 Democratic presidential nomination.

“Our mission this year is to help elevate the conversation around politics happening on campus and educate students since many aren’t aware of what the issues are and who’s running for all of the various elections and offices this midterm election year,” said Rasmussen.

Indeed, the club has kept busy by hosting candidates at its meetings, reaching out to the education, LGBTQ, and other progressive communities in Yuma and participating in events in and out of campus. Most notably, the club helped organize a March For Our Lives rally on Mar. 25, in which over 200 participants marched from Yuma High School to the city hall to speak about gun control.

As president of the very proactive club, Rasmussen has had the privilege of meeting and speaking with important politicians like Arizona Gov. candidate Steve Farley, Arizona Congress candidate David Brill, Arizona Senate candidate Michelle Harris, Ohio congress member Nina Turner and even Bernie Sanders himself. On occasion, several key members of the club have also shared in the exciting encounters.

By doing so, Rasmussen hopes to make politics more accessible to AWC.

“We want to give students one-on-one facetime with people that are going to be representing them in government,” he said, “We’ve had David Schapira come to town—he’s running for state superintendent—and we [had] Deedra Abboud coming to campus—she’s the immigration lawyer who’s running for United States Senate for Jeff Flake’s seat. If she wins, she’ll be the very first Muslim woman to represent a state in the Senate, so we’re very excited about her.”

So what does the club stand for? Rasmussen claims the same issues that Sen. Sanders ran his campaign on: healthcare for all, making college affordable (if not free) for American citizens, comprehensive immigration reform, caring for DACA students, gun control and LGBT rights.  The club also supports the current Red For Ed movement.

Rasmussen believes that one of the important goals of Our Revolution is to hold Democrats’ feet to the fire on these issues. He feels that many Democrats in office today are bought by big corporations and interests and don’t effect any change in legislation. As a result, he’s noticed great pushback against Our Revolution from these Democrats because they place progressive values ahead of party, partisanship, and loyalty.

“While many of the candidates we’re working with are running as Democrats, we’re looking at their values first and not just if they’re ‘liberal’ because that doesn’t hold water like it used to,” said Rasmussen, “The Democratic Party used to be the party of the working man, of the people, of fighting for everyone, and they’ve become very nuzzled up to Wall Street over the last few decades.”

Despite the current political climate in the U.S., Rasmussen feels great hope that Our Revolution AWC can help make a difference locally. He believes that many people are discouraged because they feel as though they’re in “Trump country,” but Rasmussen notes that there are more registered Democrats in Yuma County than there are Republicans.

Rasmussen is proud of the young leaders in Our Revolution AWC that have been outspoken in the causes they believe in. He believes that these leaders are going to be the role models that will prove that anyone can be a leader, anyone can get involved, anyone can understand the issues, and anyone can get their voice heard.

“Once we get those leaders visible and in front of students, that’s going to be a game changer,” he said.

Furthermore, he believes that Yuma is on the verge of a culture change and people are ready for it to grow out of its small-town mentality. The only thing standing in the way is low voter turnout, especially in mid-term elections, but he’s fervent in his belief that change will come.

“Change is possible, we just have to fight for it. We can have the America we believe in. In a democracy, the people who show up are the ones that get to make the decisions, and if you don’t show up, you’re letting other people make decisions for you,” he concluded, “Yeah, politics is ugly right now . . . but if it’s ugly and bad, we need more people willing to fight, not less.”