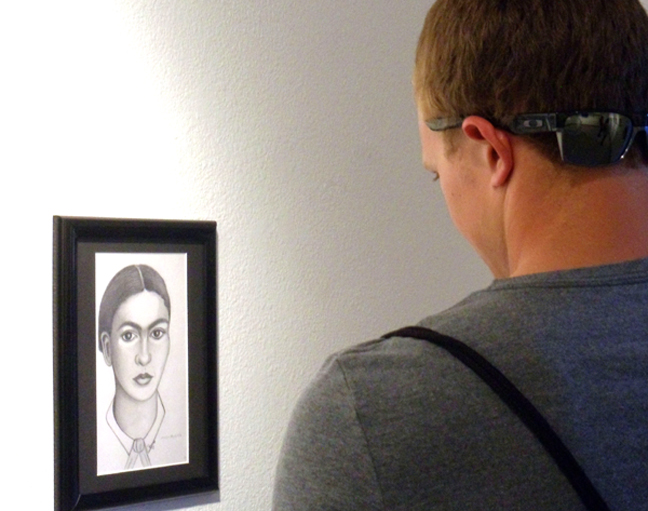 Many faces of Frida

Local artist and Arizona Western College student Pamela Carvajal Drapala made her life-long dream to be an artist come true.

Last year Drapala began drawing portraits of Frida Kahlo from photographs of the famous artist at different stages in her life. Drapala stated that she put herself into the drawings she created of Frida.

From July to December she created 20 drawing depicting Frida as she envisioned her. The AWC Art Gallery exhibited that collection of work, "Many Faces of Frida: An interpretation by a Yuma Artist," from Jan 13 through Feb 07 this year.

As a child Drapala's first toys were paper and pencil. From those early days she has continued her long term love of drawing and art. After high school she was encouraged to pursue a traditional career path instead of art. Consequently, Drapala went to work for the US Government. She retired from the US Department of Interior in 2009.

Drapala graduated from Arizona Western College in 1973. She returned to school after retiring and graduated from NAU in 2011 with a BA in English. She also decided to follow her childhood dream of becoming an artist. She took classes in creative writing, printmaking, drawing, painting and sculpture.

She stated, that to date, her proudest moment as an artist was "selling my nine portraits in the Yuma Farm Workers' Series." She is now an award-winning writer, poet and artist,

Drapala is currently working on a series of life-size sculptures of agriculture workers that she hopes to show at Yuma Lettuce Days. Her sculptures will give recognition to the contribution farm workers have made to the Yuma area. The farmers work in the clay and dirt, so it is fitting that they will be immortalized in clay.

Drapala is very grateful to have the chance in life to do what she wants to do. "The freedom is wonderful," she stated.

Drapala encourages students to set goals in life by telling them, "Goals are good thing to have and follow through on. You can make things happen if you set your head to do that."