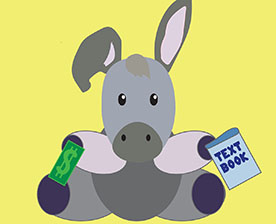 Which Democrat has the better solution for crippling educational debt?

College can be an enriching experience both educationally and socially, and in today's world, it's a necessary tool for financial and job security.

Today, however many young Americans cannot take part in this higher level of education due to its preposterously high price. Many who are able to attend leave with thousands of dollars of debt that they'll have difficulty paying off with the draconian interest rates and no way to restructure the debt. Tuition at Arizona's three state universities is currently at or above $10,000 per year -- excluding fees, books and room and board.

An affordable public college, which was available to all qualified students after World War II, has become a major topic among the Democratic candidates such as Senator Bernie Sanders and Hillary Clinton.

"It's a disgrace that in the wealthiest country in history we have the highest level of child poverty in the industrialized world, and that every year it becomes harder and harder to go to college," says Sanders.

Is Sanders' plan a fairer than the system that currently stands? I believe it is, and we should do everything we can to give everyone who wants to pursue higher education the ability to do so without incurring deleterious debt.

A famous question is, "What if the cure for cancer is in the mind of someone who can't afford the education?" This question could be asked in many other contexts as well. What if the most noble and just person can't afford law school? What if the world's most promising performers can't afford music or theater school?

In contrast to Sanders, Hillary Clinton put out a "$350 billion compound" in August, in which she states that she wants to see access to community colleges free for all, but she wants a four-year education to be affordable to all middle class Americans. This plan requires the family to pay a certain amount, requiring students to work 10 hours per week and potentially saddling them with debt. She is "not in favor of making college free for Donald Trump's kids" and the 1% whom she says should pay the full price for college.

However, her position appears rather harsh because, if we make college free, it should be free for everyone regardless of economic standing.

This minor contrast between Clinton and Sanders can be seen as a small disagreement, but in reality it is a key to distinguishing the center-right leaning Democrat Clinton from the left-leaning social Democrat Sanders. Which of them is positioned best on the political spectrum for a positive outcome as concerns access to higher education?

Since the House and Senate are currently controlled by the Republican Party, negotiations will be difficult if either Democrat is elected President. Clinton being a centrist, her position in debates with Republicans will be close to if not exactly our current system. In contrast, Sanders' position starts to the left of center and will move toward the middle ground through negotiations and would allow for a more fair way of financing higher education for all.