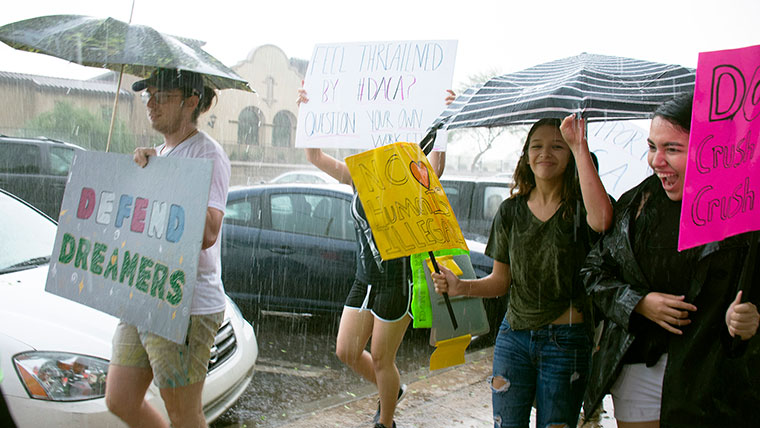 Supporting DACA during the storm

Protesting in the middle of the storm for something that the Obama administration created and now is being torn down doesn’t sound like something people in Yuma would do.

But, when Attorney General Jeff Sessions announced on Sept. 5 that the Deferred Action for Childhood Arrivals (DACA) would be ending in six months unless Congress fixed the infrastructure of the program, “Dreamers” who as of 2017 are estimated to be nearly 800,000 nationwide, felt attacked by the White House’s decision to end the program that they benefit from.

At Arizona Western College, many Matadors were ready to start taking action on the matter. They didn’t care that there were warnings coming over the emergency broadcast system to avoid going outside during the storm.

The protest was organized by two individuals who asked to remain anonymous and so gave the names of “Henry” and “Baby Dubay.”

“These people are contributing greatly to our society,” Henry said of the Dreamers. “There are a lot of myths, a lot of fear of these people that’s propagated by the business class and other people.”

The day after the White House’s decision to dismantle DACA was announced, Henry was passing out flyers on the AWC campus informing the public of a peaceful march taking place on Friday, Sept.  8, starting at 4 p.m. at the Yuma Heritage Library, 350 S. 3rd Ave.

“It’s a really unfortunate decision. These things have happened historically, whether it be Chinese immigrants and when our country was first started,” Henry said. “When there’s not a lot of class mobility, people want to blame immigrants, and it doesn’t really have much to do with them more than it has to do with the one tenth of one percent.”

On Friday morning, there was various alerts for dust storms and thunderstorms urging people to stay home and not drive. But at 4 p.m., 16 people were gathered in front of the Heritage Library talking about the decision to end DACA.

Rain then started pouring, and the group was told they would be waiting awhile for those who were still on their way due to weather problems.

“Rain is very miniscule, on a level of not even discomfort,” Henry told the group. “In fact in Yuma it’s rather pleasant.”

“They are trying to rain on our parade, but we are still marching on,” said Baby Dubay.

The actual march didn’t start until almost 5 p.m. By then, it was already pouring, and trees that had been uprooted were blocking the sidewalks.

Some of the march were discussing what chants they should say.

“La raza unida, jamas sera vencida,” shouted one lady from the back while others came up with, “No hate, no fear, immigrants are welcome here,” and “Si, se puede.”

As the march went on, various cars honked in support of DACA. However, a few people who disagreed sped through puddles to get the protestors wet.

“What are they going to do, get us more wet?” said an older man, who laughed it off.

Where sidewalks were blocked by trees, Henry made sure to grab the hands of the marchers to help them avoid tripping. Many of them were using umbrellas, but after a while everyone got used to the rain and the chanting grew louder.

Charlene Fernandez, a Yuma Democrat who serves as minority whip in the Arizona House of Representatives, greeted the protestors and comforted them by saying she would do everything possible to fight the decision to end DACA. Mario Ontiveros from the Mexican Consulate also joined the march.

“We are working hard in South County,” said Jesus Lugo, a supporter of Yuma County Indivisible and of U.S. Representative Raul Grijalva. “We are doing our best, and we encourage people to go ahead and do their best to support all of these Dreamers that are in need of our help.”